Register here
The panelists enlisted are:
Mike Summers, Professor of Chemistry, University of Maryland, Baltimore County, HHMI Investigator. Mike was involved in initiating the Meyerhof program at UMBC and is an amazing testimonial to how the establishment of a mentoring and learning program like the Meyerhof can increase the success rate for minorities entering college and going beyond. Incidentally, Mike was Sarah Keane’s postdoctoral mentor.
Jane Clarke, President of Wolfson College, Cambridge University. Jane was a biophysicist before retiring to her current post. She is a strong advocate for women’s equity and has worked throughout her career in the sciences to move this effort forward. As the President of Wolfson she is working to advance DEI initiatives across a highly multi-cultural institution.
Bil Clemons, Professor of Chemistry and structural biologist, at Cal Tech, Bil is deeply involved in Cal Tech’s developing initiatives for eliminating racial bias in their institution. He is currently the chair of the Protein Society DEI Committee. Notably, his brother is Jake Clemons, who took over as saxophonist in Bruce Springsteen’s E Street Band when his uncle, Clarence Clemons, passed away in 2011.
Leroy Jones, Dean of College of Science, Chicago State University, a MSI in Chicago. Professor Jones is a chemist who recently returned from NSF, where he served as the Project Director for the Illinois Stokes Alliance for Minority Participation Programs. Leroy is working to help build relationships between MSIs and major research institutions and will share his experiences in what makes a strong and workable partnership between MSIs and major research institutions in successfully advancing underrepresented students in STEM careers.
Carla Mattos, Professor of Chemistry, Northeastern University. Carla is “in the trenches” working on equity and inclusiveness issues in the graduate and undergraduate program at NEU.

The Diversifying Protein Science webinar is part of the Protein Society's commitment to invest in outreach, mentoring and inclusion initiatives that can help address inequities and contribute to meaningful, sustained change. The webinar will include best practices  for improving Diversity, Equity and Inclusion (DEI), pipeline solutions, a roadmap for successful DEI, and recruitment and retention. 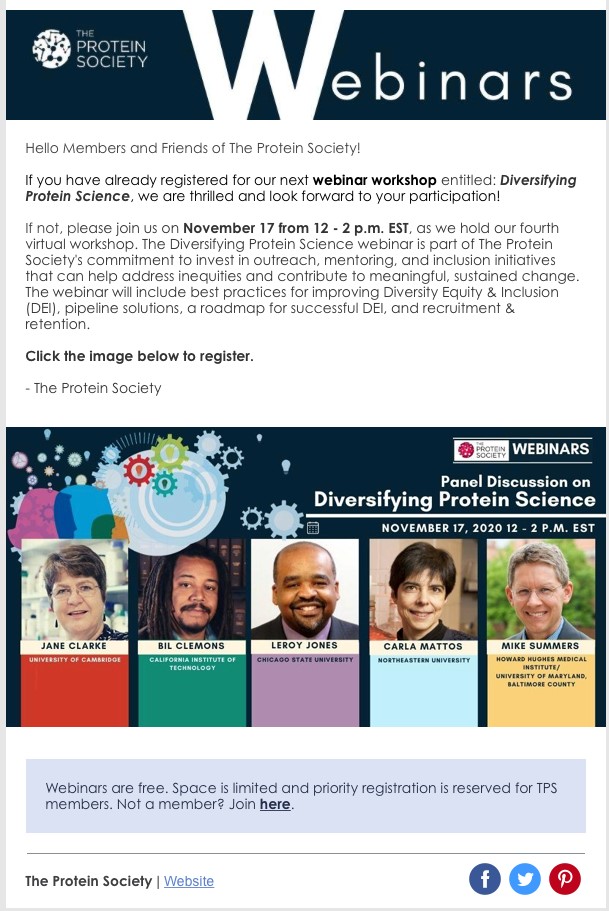