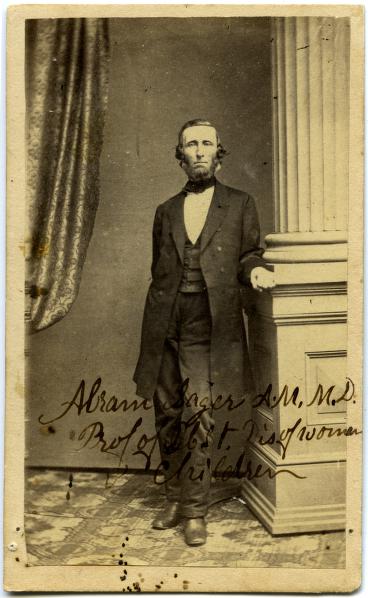 Abram Sager, MD, came to the University of Michigan in 1842 for an unsalaried position teaching botany and zoology. His position became a regular appointment in 1847, but being a medical doctor, he was eager to establish a formal medical department at the University. At this time, the state of Michigan faced economic struggles and the University was no different. In fact, U-M was striving to exist despite financial problems. As a result, the Regents had difficulty mobilizing the 1837 University Act to found a Medical Department. Regent and physician Zina Pitcher encouraged Sager, Silas Douglas and others to address the Board of Regents concerning this matter. In 1847 they did just that, pointing out that at least 70 Michigan residents had been forced to leave the state for medical education. Sager’s efforts helped facilitate the Regents’ 1848 decision to establish the Department. Sager’s subsequent appointment as professor of theory and practice of medicine is regarded as one of the founding acts of the Medical School.

Besides being instrumental in the formation of the Medical Department, Sager influenced medicine at Michigan with his enthusiasm for natural science. He graduated from Castleton Medical College in 1835 with familiarity in botany, zoology and geology. From 1837-40, he was chief in charge of the Botanical and Zoological Department in the Michigan State Geological Survey. As a teacher, he is said to have come to class with a frog in his pocket, insects fastened to his hat, and a snake that managed to escape into the classroom. His vast collection of 1,200 species and 12,000 specimens helped found the University’s Herbarium, and Sager’s ardent interest in natural science helped forge an important bridge between basic and applied sciences in medical education at Michigan.

Sager’s clinical expertise also contributed to the University’s Medical Department. He practiced in Detroit and then Jackson, performing what was probably the first Cesarean section in Michigan in 1869. He was a modest man, said to have a kindly manner with the sick. After his initial appointment at the University of Michigan, Sager became professor of obstetrics in 1850 and the chair of diseases of women and children from 1854-1860. In 1875, he retired after thirty-three years of service at the University. His resignation was in part due to the formation of the Homeopathic Department, which he strongly opposed. Sager’s legacy to the Medical School is not only in his service as the first dean, but also the example he set as a fine physician and major proponent of the school’s establishment.