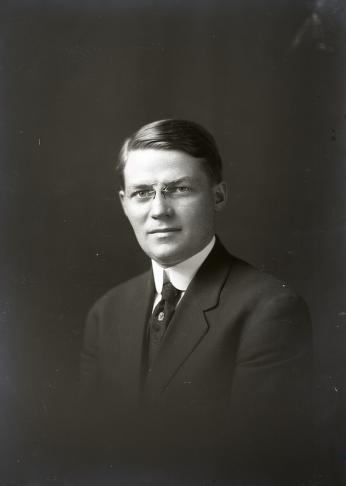 Albion Walter Hewlett was a founding father of cardiology who served as the Michigan Medical School’s Chief of Medicine from 1908-1916 (his last post before becoming Chair of Medicine at the newly formed Leland Stanford School of Medicine). The main focus of Dr. Hewlett’s research throughout his medical career was the cardiovascular system. At the time of his arrival at Michigan, Dr. Hewlett was considered the best young clinician in the country. He was a strong proponent of making medical practice more scientific, believing that a good medical school could only be great with a strong integrated research program.

He is credited with bringing the first electrocardiogram machine to Michigan’s campus in 1913. Dr. Hewlett was a founding member of the American Society for the Advancement of Clinical Investigation, a co-editor of the medical journal Heart, and a chairman of the American Medical Association during his tenure at the University.

Beginning in 1912, Dr. Hewlett created an elective course in circulation that included disturbances of cardiac rhythm, the consequences of valvular lesions, the causes and effects of hypertension and pulmonary edema. He also published papers on cardiac arrhythmias and disorders of cardiac conduction, among other related topics. Much of the work that is done in the clinics and research labs of Michigan’s Cardiovascular Center today are in direct correlation to the early efforts of Dr. Hewlett and his colleagues.

“Being the A. Walter Hewlett Professor is a privilege. It is an honor to be connected to Dr. Hewlett’s legacy. I’d like to believe that the things I’m trying to do and what the teams that I work with are trying to do are honoring what Dr. Hewlett did 100 years ago in education, research and clinical care" - Kim Eagle, MD, A. Walter Hewlett Professor of Internal Medicine