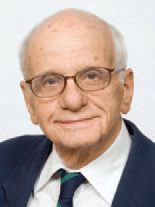 Dr. Keith Henley, a renowned hepatologist at Michigan Medicine, began the program's work over 50 years ago. He earned an enviable reputation for integrity, accessibility, scrupulous fairness, and a deep moral conscience.

Dr. Henley joined the University of Michigan Medical School faculty in 1954 and in 1972 began leading the Division of Gastroenterology as chief. In the same year, he founded the Hepatology Program. In 1985, he, along with Dr. Jeremiah Turcotte (the T of the CTP [Child-Turcotte-Pugh] score that is used to assess severity of liver disease), established the University of Michigan Liver Transplant Program, one of the first in the United States.

Dr. Henley was the first to describe alanine aminotransferase (ALT) in serum, which is used throughout the world as a diagnostic tool for liver injury. His primary research focus during the latter part of his career and into retirement, was the development of an infrastructure to aid in the education and care of patients with hepatitis in Vietnam and in other countries afflicted with high incidences of the disease.

Dr. Henley also strengthened the GI presence at the Ann Arbor Veterans Affairs hospital. The results of his clinical efforts and his hepatology research have had far-reaching impact on the care of liver disease and liver transplant patients. Dr. Henley led the Division until 1981 and retired in 1993.

Following his retirement, Dr. Henley remained active as a faculty member and professor emeritus in the Department of Internal Medicine. In honor of Dr. Henley’s contribution to the field of hepatology, the care of patients with liver diseases, and the Michigan Medicine Division of Gastroenterology and Hepatology, the University of Michigan and the Henley Family established the Keith S. Henley, MD, Collegiate Professorship in Gastroenterology in 2008. In 2009, Dr. Henley was honored with the Paul De Kruif Lifetime Achievement Award.

About the Hepatology Program