Below are patient stories about what it's like to live with diabetes.

Nicoleta Schock, who lives with type 1 diabetes, truly appreciates the advances that have been made in diabetes research and care. Schock, who was born and raised in Romania, has fond memories of her childhood but her health along the way has been marked with many ups and downs.

In Romania, when Schock was just six years old, she began experiencing the severe symptoms the disease can cause, extreme thirst, fatigue and weight loss. Since diabetes runs in her family, her parents took her to see a physician who diagnosed her with type 1 diabetes.

After she was diagnosed, it became difficult to manage extreme sugar highs and lows with the lack of medical technology. “Back then, I didn’t have a glucometer, so I never really knew what my true blood sugar was,” says Schock.

As such, Schock’s family paid close attention to her diet. “My family watched what I ate all the time. They would keep me away from sweets. I remember my brothers and sisters were able to eat candy but I was given chewing gum. But even with this, there were many times when my sugar level would be very high or drop too low.”

With increased health problems and her father’s relatives already residing in the United States, Nicoleta’s family decided to move. So in 1991, at the tender age of 16, they uprooted from Romania and became residents of Michigan. Unable to speak English and having no health insurance, her family endured a lot. Schock remembers her family spending a small fortune on diabetes supplies.

“If I remember correctly, it was roughly $35 for a bottle of insulin and I used about three per month. This did not include the cost of other supplies I needed, like syringes.”

As the years passed, Schock eventually married and received health insurance. When she and her husband found out they were expecting their first child they were referred to Dr. Robert Lash, director of High Risk Obstetrics for Gestational Diabetes at the University of Michigan. Under his guidance, Schock delivered a healthy baby boy and, 14 months later, a baby girl. “I contribute their good health to Dr. Lash’s care,” she says. (The photo above of Nicoleta and her children was taken in 2006.)

After her pregnancies, Schock sought diabetes care outside the U-M network. During this time, she began experiencing severely low blood sugar readings. She recalls one situation that was truly alarming.

“I began losing the ability to tell when my sugar was dropping. One day I was out shopping and didn’t realize it was getting too low. I remember coming out of the store and I couldn’t find my car. I finally found it and, when I got in, I passed out for nearly five hours. My husband was looking for me and calling my cell phone. He called 911 and they began searching for my car. Fortunately, I awoke and had enough strength to drive home, which, looking back, I would not advise anyone to do.”

Schock soon decided to be seek her complete diabetes care from a U-M physician and was referred to Dr. Rodica Pop-Busui, a U-M endocrinologist, who is also from Romania.

“I couldn’t have asked for a better physician! Right away I knew I was in the best hands possible for my disease. And my nurse educator, Linda Dale, was fantastic, too. She spent a lot of time with me. I attended the group classes for people with type 1 diabetes and learned a lot of new information that helped me take better care of my diabetes."

Part of her care has been using a diabetic pump — a small device about the size of a pager that continually delivers a small dose of insulin. “I had to be sold on the pump.” Schock says. “I didn’t like the idea of being attached to something 24 hours a day. But now I have used it for almost a year and I love it. It is much easier than carrying around syringes and bottles of insulin. Plus, my sugar levels have improved drastically.”

How is she doing today? Her health has improved, something she attributes to those she loves most — her husband and children — as well as the care she receives at the University of Michigan.

“My husband’s attention to my disease has been amazing. He is always very supportive and has helped me every step of the way. He makes sure I am eating okay and testing my sugar. Plus, he always checks up on me if I am running late in case something has happened.” Schock also gives much praise to her children. “They know what to do in case of an emergency and can sense if my sugar is low about as well as I can.”

Finally, when asked about the difficulties of having diabetes, Schock quickly remarks, “I feel it is harder on my family than it is on me. They have to cope with the disease, too. For me, it isn’t bad. I eat healthy, test my sugar often and stay active with two children. Plus, these days type 1 diabetes can be treated remarkably well. Children today have it much better than I did, thankfully. It would be nice for there to be a cure, but I can’t complain.”

Through daily management, a great attitude and top notch care from U-M diabetes experts, Nicoleta Schock enjoys a healthy and active lifestyle doing what she loves most, being a mom. 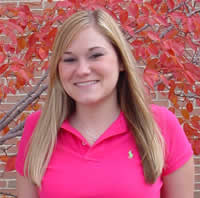 Finding out you have diabetes can be overwhelming for anyone, especially for a young child — as was in the case of Amanda Tyrpin, who was diagnosed with type 1 diabetes at the tender age of four. Now, more than 16 years later, Amanda has given herself over 19,000 injections — not to mention the thousands of finger pricks to test her blood sugar. But like most young children diagnosed with diabetes, Amanda has grown up with the disease and she cannot remember the few years of her life without it.

Today, Amanda is a normal college student who works part-time and enjoys seeing her boyfriend. But as Amanda eats her lunch at a local restaurant and discusses her upcoming college courses, she quietly and matter-of-factly pulls a syringe from her purse, calibrates the amount of insulin she needs, and without hesitation continues talking and gently slides the needle under her skin. Of course, she is used to giving herself injections — she has had plenty of practice — but her “normal” way of life is, and has been, drastically different than most her age.

Amanda’s story with diabetes began when she four years old. She was a rambunctious little girl who loved to dance, play dress-up, spin in frilly dresses, and eat Lucky Charms for breakfast. And just like a lot of children, Amanda began wetting the bed at night. Diane, Amanda’s mom, felt this was normal and decided to simply limit Amanda’s liquid intake before she went to sleep. But the bed wetting persisted and, when Diane caught her daughter drinking water from the bathroom sink faucet, she knew something was wrong. Thinking Amanda had a urinary tract infection, Diane took her to visit their primary care physician. What Diane did not realize was that the reoccurring bed wetting and extreme thirst were symptoms of type 1 diabetes.

At their physician’s office, Amanda’s blood and urine samples were tested. The results shocked her parents: Amanda had type 1 diabetes. Without much time to think about the diagnosis, Amanda and her parents were whisked away to a nearby Children’s Hospital to treat her elevated blood glucose level. After five grueling days, Amanda was sent home and her life with diabetes was set in motion. Her mom began giving her injections and monitoring her glucose levels. At the time she was on two injections per day: one injection in the morning and one in the evening before bed. “My mom said I was really good about taking the shots. As time went on, though, I would ask her when I was going to get better, because I didn’t understand I had a disease. I can imagine that must have been hard for her.”

Growing up, Amanda’s experience in school was much the same as other kids. However, she would stop at the school’s office each day before lunch to test her blood glucose and give herself an injection. The amount of insulin she needed was determined by what she was going to eat for lunch. “I didn’t think much of it and neither did my friends or other classmates.”

In the third grade, Amanda won “The Young Author’s Award” for a story she wrote depicting her life with diabetes. The endocrinologist she was seeing at the time even made slides of her story to show children recently diagnosed with the disease. “That was a neat experience and I still think it was great that my physician used my story to teach others.”

While Amanda enjoyed cheerleading and spending time with friends, some of the ordinary childhood activities like trick-or-treating needed an added twist. “I would get dressed up in a costume and go trick-or-treating but dad would make a deal with me. He would give me money in exchange for the candy I brought home and I could use it to buy whatever, a toy or even sugar-free candy. So it wasn’t that bad.”

Living with diabetes became routine for Amanda. At the age of 10, Amanda began giving herself her own injections. “I remember the stares I used to get in public and the faces people would make when I needed to take insulin. That used to bother me. Now, I don’t care. I try to be discreet about the injections but the looks don’t bother me anymore.” But her friends were much more sympathetic and were always there to lend a hand. Amanda recalls, “At cheerleading practice, if my sugar was getting low, they would go to a vending machine to buy a snack for me. They were really good about it.”

Aside from the daily management it took to control her disease, several scary situations occurred for Amanda and her family. “When I was a freshman in high school, my cheerleading squad had a sleepover. In the morning around 11:00 a.m., everyone was awake except me. All of my friends thought I was sleeping. They tried to wake me up but I was unconscious. Luckily, my friend’s mother who was hosting the sleepover was also a diabetic and knew what to do. She checked my blood sugar and it was very low so she found my glucagon emergency kit and gave me the injection. I woke up and everything was fine, except all of my friends were frightened and crying.”

Amanda’s medical care is overseen by endocrinologist Dr. Rodica Pop-Busui at the University of Michigan Health System's Metabolism, Endocrinology, & Diabetes Division. “I like Dr. Pop-Busui. She is easy to talk to and she understands how I am feeling and listens to what I have to say.”

Amanda gives much thanks to her family’s support over the years. “There were times I felt upset or different because I had diabetes. My family was always there for me through support and encouragement. They taught me to believe in myself and to know that I was in control of my life, not the diabetes.”

What does Amanda want to tell others who have diabetes? “Living with diabetes can be frustrating at times but don’t let the disease become who you are. Just think that things could be worse and as long as you take care of yourself, you can live a normal, productive, happy life!”