Our Division Chiefs - Past through Present 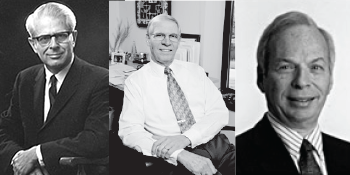 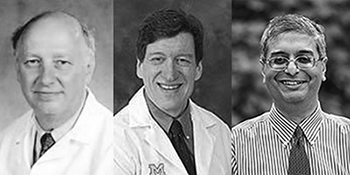 Established in 1964, the University of Michigan Division of Nephrology has grown tremendously over the last 50 years and is now internationally recognized for its patient care, research, and education. The division's success today has been built on a tradition of excellence which first started when Dr. John M. Weller accepted to become Nephrology's first division chief.

Dr. Weller earned his bachelor’s degree at the University of Michigan in 1940 and his Doctor of Medicine degree at Harvard in 1943. After a decade in which he completed his residency and taught at Harvard, he returned home to the University of Michigan as an assistant professor in 1953. Shortly following his arrival, he was called away for a year and a half service in the U.S. Army Medical Corps. Following his stint in the Army, Dr. Weller resumed his career at the University of Michigan, rising up through the ranks in Nephrology to become a full professor in 1963. He was tapped to become Nephrology’s first division chief as the growing unit was formed into an independent division of Internal Medicine in 1964. Dr. Weller held membership in numerous professional societies, played a key leadership role in the activities of the National Kidney Foundation of Michigan, and was the author of numerous scientific publications as well as several books concerned with diseases of the kidney. Dr. Weller held the position until 1977.

In 1969, Dr. Ronald Easterling, who was instrumental in the establishment of dialysis, began the Michigan Kidney Registry (MKR).  This was the oldest state-wide end stage renal disease (ESRD) registry in the United States. The first publications dealt with difference in ESRD by race. When Dr. Easterling left the U-M in 1979, Dr. John Weller became the MKR Director. Papers were published comparing dialysis versus transplant survival - a novelty since prior work had not dealt with time to treatment bias.

In 1988, Dr. Roger Wiggins became Division Chief.  He continued to build a diverse kidney research group based not only in Internal Medicine but also in Pediatrics, Pathology, the School of Public Health, Engineering and other areas to develop new knowledge and apply new approaches to better serve patients.

In 1989, Dr. Frank (Chip) Brosius, III, joins the U-M faculty. Dr. Brosius received a Bachelor of General Studies in 1976 and his medical degree in 1979 from the University of Kansas. He served as the director of the Nephrology Fellowship Program from 1996 to 2003.

In 1997, the National Institutes of Health (NIH) sent out a request for proposals for the United States Renal Data System (USRDS) and Dr. Port and his group were considered a strong contender.  At the suggestion of Dr. Nathan Levin of Mount Sinai, New York, Dr. Port and Dr. Philip Held from the Urban Institute in Washington, DC, joined forces and wrote an unbeatable and winning proposal. The Michigan team included Dr. Port (deputy Director), Dr. Wolfe (Director of Biostatistics), Dr. Hawthorne (Director of Epidemiology) and staff from the MKR.

Near the end of the five-year USRDS contract, Dr. Held and five members of his team were recruited to the University of Michigan as Professor of Medicine.  With this the re-bid was submitted and granted with Dr. Held serving as principal investigator. During both USRDS cycles numerous Nephrology fellows and faculty members worked with the USRDS team and wrote very successful papers.

In 2004, Dr. Frank Brosius was named Chief of the Nephrology Division. Dr. Brosius, who is a national and internationally recognized physician and researcher, spent decades determining exactly how elevated blood glucose and other diabetes-associated abnormalities damage kidney cells. In addition, and more recently, he has worked to uncover the transcriptomic, proteomic and metabolite profiles of diabetic complications in both humans and mouse models and has been sought out by pharmaceutical companies for unbiased recommendations about the best animal models to use for preclinical studies of diabetic nephropathy as well as for identification of potential targets in humans. He published more than 100 peer-reviewed articles in high impact journals, and served on the editorial boards for the American Journal of Physiology-Renal Physiology, the Journal of the American Society of Nephrology and the West Indian Medical Journal.