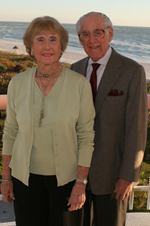 Marvin Danto, after starting as an assistant manager for the Detroit-based Englander Furniture Shops, went on to become Chief Executive Officer and Chairman of the Board of the eight-store chain. Later, he turned his lifetime of experience toward developing a new concept in marketing home furnishings – the Michigan Design Center.

Described as “the pages of your favorite design magazine come to life,” the 215,000-square-foot facility features over 40 professionally-designed showrooms highlighting the most exclusive home furnishings for design professionals and their clients. Danto later expanded the idea to build the 775,000-square-foot Design Center of the Americas, located near Ft. Lauderdale.

Throughout his career, Danto has solved many problems and faced many challenges. However, he says, one of his most difficult challenges has had nothing to do with business at all, but rather, a complex medical mystery.

For many years, Danto suffered from extreme sensitivity to cold that routinely caused his fingers and toes to blanch, as well as a host of other symptoms including numbness, tingling and burning sensations that made many daily activities very difficult, especially during cold Michigan winters.

This common syndrome is called Raynaud phenomenon. While easily diagnosed, recognizing its cause is far more difficult and treatments are seldom effective. Over the course of 15 years, Danto visited some of the nation’s top hospitals to learn more about his condition and to find more effective treatments. But, he says, no solutions were available and no answers forthcoming.

“Dr. Eagle was extremely thorough in evaluating my symptoms and my medical history,” says Danto. “He made a point of keeping me well-informed and reported back to me on my progress at every step. I found his attention to detail and his respect for me as a patient to be very refreshing.”

Danto says that Eagle’s exceptional skill and caring manner helped him find the medical answers he urgently needed – not only regarding his cardiac condition, but for his worsening Raynaud symptoms.

Eagle referred him to James R. Seibold, M.D., director of the U-M Scleroderma Program, who was able to not only confirm Danto’s Raynaud phenomenon, but, more importantly, recognize it as a symptom of scleroderma.

According to Seibold, Raynaud phenomenon is the most common initial symptom of scleroderma and ultimately develops in nearly all such patients.

Marvin Danto says he is very grateful to Eagle for taking the time to help him get the specialized care he needed and grateful to the team of Eagle and Seibold for mapping out a collaborative plan for effective treatment.

Danto says he attributes much of the credit for improvement of his symptoms to the professionalism and skill of Eagle and Seibold – who he characterizes as emblematic of the commitment to excellence that typifies the University of Michigan.

While he feels fortunate that his own case of scleroderma is relatively mild, Danto is very aware that the disease remains the most fatal of all rheumatologic illnesses – and one that continues to impose an overwhelming burden on many of its victims.

A desire to help others suffering with scleroderma, coupled with gratitude for the expert and compassionate care he received ultimately led Danto and his wife, Betty, to give $2 million to help support the U-M Scleroderma Program. Betty Danto has also been treated at the U-M, and two of the couple’s three children graduated from the University.

Their gift to the Scleroderma Program in the Division of Rheumatology will establish the Marvin and Betty Danto Research Professorship in Connective Tissue Research, as well as provide significant funding for the Program’s research into finding more effective treatments – and ultimately a cure – for scleroderma.

That’s why Eagle and his colleagues in the U-M Cardiovascular Center (CVC) are also working hard to gain a better understanding of the processes active in the blood vessel damage caused by scleroderma. Eagle says such knowledge will directly benefit persons with pulmonary hypertension, peripheral vascular disease, and perhaps atherosclerosis.

For that reason, the Dantos have also decided to recognize Eagle’s work in cardiology and vascular biology by giving an additional $2 million to help fund the U-M Health System’s new CVC building project. Danto says he first learned of the CVC building and vision from Eagle, a co-director of the CVC.

Calling Eagle “one of the finest individuals we have ever known” and an “absolutely marvelous” physician, the Dantos say they hope their CVC gift will help more people learn about cardiovascular conditions, including scleroderma, that affect so many people and their families. They especially hope that other physicians can come to the building to learn from U-M faculty and staff, to understand the latest findings about this disease and its treatment.

“We feel very close and indebted to the University of Michigan Health System,” says Marvin Danto.

In recognition of their gift to the CVC, the University plans to name the auditorium in the Center’s new clinical building The Marvin and Betty Danto Auditorium, and to utilize the gift to promote education and training for cardiovascular professionals in the CVC.

Now 90, Marvin Danto acknowledges that the benefits of the research he and his wife are helping to make possible may simply come too late to help him personally. Nevertheless, he is optimistic about the work in this area now being done at the U-M.

“Hopefully the work that Kim Eagle, Jim Seibold and others are doing will someday bring real benefits to people who are suffering with this condition.”

The Dantos, who still live in Michigan but now spend their winters in Longboat Key, Florida, say they are excited not only to be supporting ground-breaking research efforts by researchers like Eagle and Seibold, but also to be helping make possible future U-M research on this important subject.

“We don’t consider ourselves heroes,” says Marvin Danto, “we’re just doing what we can to help.”

The Dantos say that everyone they’ve encountered in the U-M Health System has been “just phenomenal,” and that they both feel “very lucky to have the opportunity to help build upon the generations of prior benefactors who’ve all done their part to help find effective treatments and cures.”

“It really feels good to help yourself while helping others,” says Marvin Danto. “For their own good, and for the good of their children and grandchildren, I encourage everyone who has the means to consider helping support this critical medical research. These people are doing truly amazing work, but they can’t do it alone.”