Rodica Busui, MD, PhD was named the Larry D. Soderquist Professor at the reseating inauguration that took place on September 5, 2019. Larry Soderquist, the brother of Delores (Dee) Brehm, was one of the nation's most respected securities law scholars and director of the Corporate and Securities Law Institute at Vanderbilt University Law School. The professorship was created in memory of Mr. Soderquist by Bill and Dee Brehm. 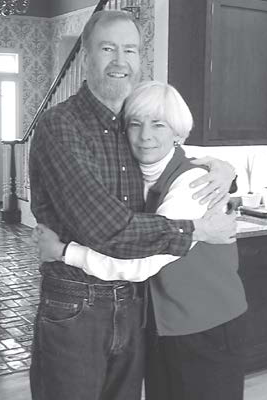 Ann Soderquist recalls that her husband, Larry Soderquist, was one of the most focused people she ever knew. Sometimes she would open the door to his home office, walk in, and stand in front of him as he wrote at his laptop.

He may have been working on a new edition of one of his texts, providing information to a journalist with a corporate law question, sharing his expertise with an associate at the law firm to which he was of counsel, or helping one of his students at Vanderbilt University Law School understand the intricacies of securities law.

“Sometimes it would take a while before he realized I was there,” says Ann Soderquist. “Then, invariably, he would startle — he was just so focused on what he was doing. But no matter what he was doing, he would drop it and turn his full attention to me.”

Soderquist’s abilities to focus so intently and to care so deeply for those around him were hallmarks of his extraordinary life.

Soderquist, who died in 2005, is memorialized by the Larry D. Soderquist Professorship in the University of Michigan Medical School.

Soderquist was born and raised in Ypsilanti, Michigan. His father, Hugo, had come to America from Sweden when he was 19 years old. His mother, Emma, was born on a Michigan farm. Neither received an education beyond the eighth grade but encouraged Larry and his sister, Delores, to work hard and take advantage of every opportunity.

“Larry was 14 years younger than me, so I grew up pretty much as an only child and so did he,” recalls Delores “Dee” Brehm. “Larry was an entrepreneur. He worked and had plans for what he was going to do.” After high school, Soderquist spent a year at the University of Michigan, then transferred to Eastern Michigan University, where he graduated with a major in English and minor in political science in 1966. That fall he entered Harvard Law School; it was there, in the graduate commons cafeteria, that he met the woman who was to become his wife. Ann Mangelsdorf was a Louisiana-born, New Jersey-raised biology major taking a year off from college to live and work in Boston. In Larry, she says, she saw someone who combined ambition and intelligence with humility and remarkable integrity.

“He seemed like someone who knew what he wanted to do with his life and who was able to go after it. He was certainly very bright, and he was funny, too. He had this enormous trove of quotes that he could dredge up for any situation,” she recalls. “There was self-assurance and drive to him, but he was warm and loving at the same time.”

Larry and Ann married in 1968 in Summit, New Jersey. From the start, their marriage was a partnership in every sense of the word. From 1969-71, the couple lived in Okinawa, Japan, where Larry served as a military police officer in the U.S. Army. It was in Okinawa that their first son, Hans, was born in 1970.

The Soderquists returned to the United States in 1971. Larry joined the Wall Street law firm of Milbank, Tweed, Hadley and McCloy, and Ann began a doctoral program in biology at New York University. Their second son, Lars, was born in 1973.

In 1976, Larry left law practice and accepted a faculty appointment at the University of Notre Dame Law School and Ann continued her graduate training there. When Vanderbilt University Law School offered Larry a one-year visitorship, Ann completed her doctorate at Notre Dame and took a postdoctoral position at Vanderbilt. Larry’s one-year visitorship turned into a tenured full professorship, and the Soderquists remained in Nashville. Ann held research faculty appointments at Vanderbilt Medical School while Larry Soderquist taught and wrote on corporate and securities law. The textbooks and law review articles he wrote, and the Practising Law Institute training programs he conducted around the country, led to Soderquist being recognized as one of the nation’s foremost experts in securities law.

Two of the most notable books he authored are Understanding the Securities Laws (an edition of which was published in the People’s Republic of China in 2004) and Investor’s Rights Handbook. His writing is recognized for its elegant and accessible language — a result, suggests his wife, of his devotion to clarity and simplicity in all forms of writing.

In the fall of 1986, the Soderquists lived in Moscow, U.S.S.R., where both participated in academic exchanges. Larry lectured on American law at Moscow State University under a Fulbright Lectureship and Ann worked at the Institute of Bioorganic Chemistry.

Upon returning to Nashville, Soderquist was named director of Vanderbilt’s Corporate and Securities Law Institute. He became a sought-after speaker on securities law and was often quoted in the national media. In 1999, Harvard Law School appointed him the inaugural holder of the Joseph Flom Visiting Chair in Law and Business. By that time Ann had left science, had become a minister, and was serving a small rural church.

While reaching the pinnacle of his field was a source of fulfillment for Soderquist, it was not how he defined himself. He was a man with many interests and dreams. Ann Soderquist recalls how, early in their marriage, the two of them tried to find a way to describe his unusually wide-ranging interests.

“We came up with ‘contrasty,’ ” she says. “I don’t remember which of us came up with the word, but it captures both the disparate directions of his interests and the complex nature of his personality.”

And his interests did, indeed, cast a wide net. He rode motorcycles. He flew airplanes. He was an inveterate collector of items as diverse as military memorabilia, primitive American antiques, and all things related to Billy Graham and Peter Marshall. In addition to eight books and numerous articles on law, for a time he wrote a weekly column for the Nashville Business Journal. He also authored two mystery novels, The Labcoat and The Iraqi Provocation.

In 1995, Soderquist was ordained, and three years later he received a doctor of ministry degree from Trinity Theological Seminary in Newburgh, Indiana. Thereafter he served as the first chaplain at the police department of Belle Meade, Tennessee, volunteered as a chaplain at the local Veterans Administration Hospital, and preached occasionally in several mostly rural churches. He also volunteered time to conduct graveside services for indigents, believing every person deserved a dignified burial.

Soderquist showed deep pride in his two sons. He admired and acknowledged their creative talents and specifically asked for their collaboration on his two novels. Hans Soderquist is a photographer who lives and works in New York City. He produced the photo on the cover of his father’s first novel and took the author photo used for both books. Lars Söderkvist (who changed his last name to the original Swedish spelling) is a graphic designer and editor in Chicago. He illustrated the cover for Soderquist’s second novel and displayed his editorial expertise in his comments and corrections to both manuscripts.

For all of Soderquist’s many accomplishments, professional and otherwise, at the core he had a simple goal. “What I know is that he wanted to be a good person, and he was — for an enormous number of people,” says his wife.

In early July 2005, Larry Soderquist was involved in an automobile accident. He died the following month as a result of his injuries. At a memorial service for Soderquist in Nashville, a retired FBI agent he had known for many years came up to Ann Soderquist. She recalls, “He told me that he had learned many things about Larry during the service, but that there was one thing he hadn’t heard. He said that Larry was a gentleman. And he said, ‘By that I mean that he was a gentle man.’ ”

And this, adds Ann, was true. “Larry was a fine, decent, honorable, kind and gentle man.” 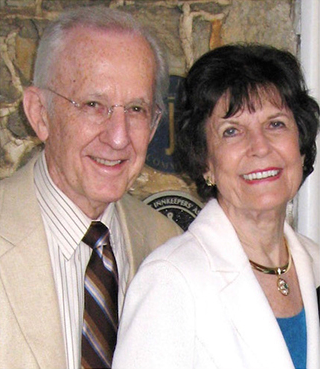 Soderquist’s sister, Dee Brehm, is married to Bill Brehm, who helped found SRA International Inc., a leading information technology consulting and systems integration company based in Fairfax, Virginia. Dee Brehm has lived with diabetes for most of her life, and because of this the Brehms have long been stalwart and generous supporters of diabetes research at the University of Michigan — Bill Brehm’s alma mater. In 2003, the couple established a research fund, the William K. and Delores S. Brehm Fund, as a step toward establishing the William K. and Delores S. Brehm Center for Type 1 Diabetes Research and Analysis — a center that would form the core of a new Michigan Comprehensive Diabetes Center aimed at coordinating diabetes-related research on the Michigan campus and beyond.

“When we set up the program with Michigan for the Diabetes Center, Bill and I set up two professorships,” says Dee Brehm. “When Larry died, we decided we wanted to honor him and asked the U-M to name a professorship for him.”

“I am so thankful to Dee and Bill,” Ann Soderquist says. “From the beginning I knew of Larry’s deep appreciation for his sister and brother-in-law for the example they had set and their encouragement of his academic pursuits. He particularly admired Bill and Dee’s drive to further type 1 diabetes research. I am pleased Larry’s name will be associated with efforts dedicated to improving lives.” 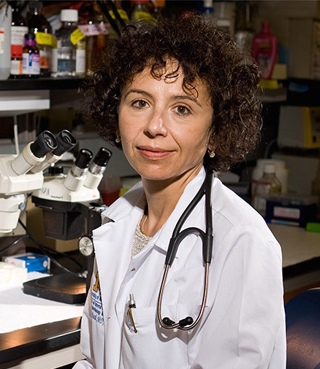 Rodica Busui, MD, PhD is a professor of internal medicine and the Larry D. Soderquist Professor in the University of Michigan Medical School. She is a prominent diabetologist at Michigan Medicine and a recognized leader in the field of diabetes and diabetes complications. She is the Associate Chair for Clinical Research in the Department of Internal Medicine and the Director of Clinical Research, Mentoring and Development in MDiabetes at the University of Michigan. Her research interests involve the chronic complications of diabetes, diabetic peripheral and cardiovascular autonomic neuropathy, nephropathy and cardiovascular disease and novel technologies for treating type 1 diabetes.

Dr. Busui has published over 160 peer-reviewed manuscripts and book chapters, and received awards from the Fulbright Foundation, the American Diabetes Association (ADA), and the University of Michigan.

She has been an elected member of the Clinical Practice Committee of the ADA. More recently Dr. Busui was elected to Chair the ADA Scientific Research Review Clinical, the Research Committee of the landmark DCT/EDIC study and to chair the Diabetes and Cardiovascular Disease Interest Group. She is also one of the principal investigators in the recently established NIDDK Diabetes Foot Consortium.

She has contributed her research efforts and leadership to some of the most important national and international diabetes clinical trials to date including the NHLBI-funded Action to Control Cardiovascular Risk in Diabetes (ACCORD) trial, the following NIDDK-funded trials: Diabetes Control and Complications Trial/Epidemiology of Diabetes Interventions and Complications, a multicenter clinical trial of Allopurinol to Prevent GFR Loss in Type 1 Diabetes (PERL), Glycemia Reduction Approaches for Diabetes: A Comparative Effectiveness Study (GRADE), Bypass angioplasty Revascularization Diabetes 2 (BARI-2D), Targeting Inflammation with Salsalate for Type 2 Diabetes (TINSAL T2D) and many others funded by foundations and industry such as the Cardiovascular Safety of Insulin Degludec Versus Insulin Glargine in Patients with Type 2 Diabetes at High Risk of Cardiovascular Events (DEVOTE), Wireless Innovation for Seniors with Diabetes Mellitus (WISDM) or REPLACE-BG. In addition she designed and leads several investigator initiated studies looking at disease modifying agents for diabetic neuropathy and other complications.

Return to the Division of Metabolism, Endocrinology & Diabetes.