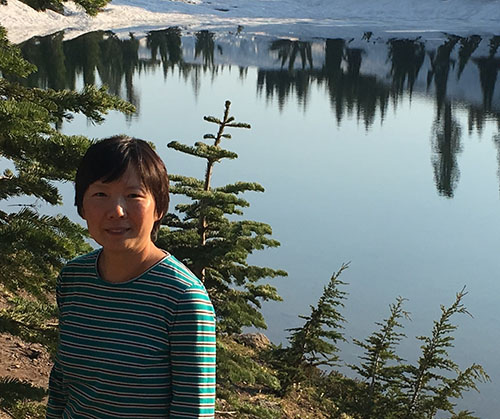 Nominator, Eric Mullen: "Internal Medicine had dreams of a trackable incentive plan, more manageable financial reports, a database that could be used by multiple people, and financial reports run at more routine intervals. This was only a dream until Wei joined the team. Wei helped take big steps in a small amount of time and she will help us make leaps as we enter the next phases of our plans."

Wei Wang is the Department's programmer within the Finance office. However, her services expand beyond Finance. Wei is a problem solver and valuable member of Department administration. Wei was hired three years ago to be the lead project manager for the Clinical Incentive Program Redesign. She joined the project mid-stream and had to jump in and learn quickly. She should have been nominated for exemplary service in her first year but had not been with us the required amount of time to be nominated. Since she was hired, not only did Wei help implement the new incentive programs, but she has created reports to help reconciliation, she has improved processes for the Faculty Affairs office by working directly with them, and she has designed and built a new finance/faculty affairs database for the Department.

For the clinical incentive program, Wei created Tableau reports that can be accessed by individuals within each division to track their earned incentive progress. Wei turned our reporting dream into a reality. Since their inception, the reports have been accessed thousands of times by hundreds of people. I hear from Wei all the time, “I am not a finance person. The rest of you have the finance knowledge.” This is one of the few instances when Wei is wrong. She is smart and has become very knowledgeable about our financial and faculty affairs operations.

The finance department was on a stand-alone database platform for many, many years called Outlooksoft. A very clunky tool, used only by a few people in the Department for financial reporting and budget repository. Wei created a database from the ground up, working tirelessly with the finance staff, the faculty affairs staff and HITS/ITS. She was able to break through technical barriers to data that had been in place but not accessed. She was able to figure out various ways to access data more easily than had been done before.

Although a lot of work and process improvements still remain, Wei has taken the reigns to these projects and give the department access to data that would NOT have been done had she not agreed to join our team. Wei stretches the boundaries of what we “think” can be done and makes it happen.

Wei joined a finance group that has been stuck in its ways for 20+ years. We had an incentive program that was 19 years old when she came here. It was also very sensitive to many staff and faculty. The incentive program drives behavior within the department. We also had a financial database that was managed by the number of people that could be counted on one hand. We had processes in faculty affairs that had been unchanged for many years. Wei exemplifies leadership because she takes ownership in finding a solution to problems and tries to find a better way. She works independently. Wei is the only one that can do what she does. Many people rely on Wei to tell them what can be done, what can't, why can we and why SHOULD we do something. Wei has taken it upon herself to understand the finances, the faculty HR process, the Medical School processes, breaking down barriers with the systems teams to get us the information we need to do our jobs better. Wei is self-sufficient. Most times, Wei does her work without anyone knowing. She knows what needs to be done and simply gets it done. Wei is autonomous but involves the group when it's necessary for decisions, input, and desired outcomes. Wei is able to cut to the facts and guide us to the best solution with the help of the group.

Wei is a tireless worker and always responsive to customer questions/suggestions. Wei runs a tight ship and holds everyone accountable and has a lot on her plate. I understand her feelings that she is not a “Finance Person” but that is something not understood by her customers. Wei is able to answer most questions and takes it upon herself to do so. Wei manages the incentive dashboards and receives many questions related to the results of those reports. 99% of the time she is able to find and answer quickly and works directly with the customer. Wei is fair, but fair is subjective in the eyes of the customer. The livelihood of many people have been changed as a result of Wei’s work. Wei has been able to work through the emotion and the pushback from many as she has made improvements for the Department. It's not all Wei, but it's Wei's leadership and focus on giving the customer that they want that has helped us all stay on track.

I have covered much of this with my earlier examples. The result of Wei's work has been to change two MAJOR processes that we do: The incentive programs and financial reporting. Those two ongoing projects have been an immense undertaking and hurdles had to be cleared in order to get where we are today. There is a lot more to do and we need Wei to help us get there. Two very specific examples within the major accomplishments: