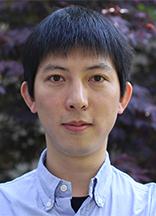 Dr. Bo Duan received a bachelor’s degree in polymer chemistry at University of Sciences and Technology of China in 2002. He earned his PhD degree in Neuroscience at the Institute of Neuroscience, Chinese Academy of Sciences in 2007 and kept working there until 2010. He did his postdoctoral work at Harvard Medical School from 2010-2016. Dr. Duan joined the faculty at the University of Michigan as an Assistant Professor in 2016. His primary appointment is in the Department of Molecular, Cellular and Developmental Biology, and he is affiliated with the Neuroscience Graduate Program, the Kresge Hearing Research Institute and the Center for Cell Plasticity and Organ Design.

The Duan lab uses a combination of mouse genetics, histochemistry, neuroanatomical tracing, electrophysiology, in vivo imaging and behavior analyses to gain understanding of the development, organization, and function of neural circuits that underlie a variety of somatosensory modalities, such as temperature, touch, pain and itch. Dr. Duan’s research also focuses on the multisensory interaction that underpins somatosensory modulation, such as neural interactions between the auditory and nociceptive systems.