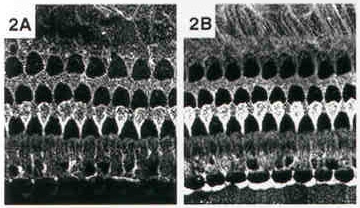 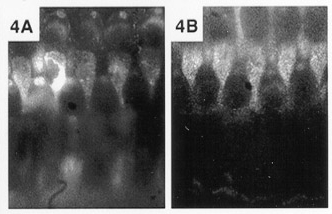 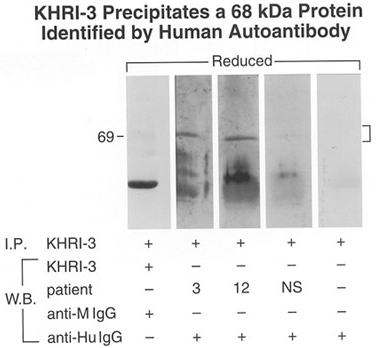 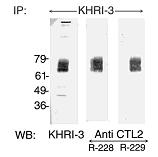 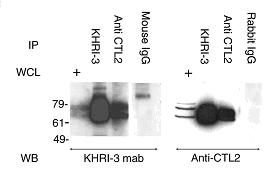 Figure 7: Predicted transmembrane structure of CTL2 (with exon 1a transcribed from the upstream promoter (1) showing 10 peptides sequenced by tandem mass spectrometry, the synthesized peptides (in blue), and the predicted locations of the extracellular N-linked carbohydrate modifications.

The Carey Laboratory studies the basis for autoimmune hearing loss, including the detection of pathogenic antibodies, identification of the inner ear target antigen and development of new diagnostic tests.

Our primary interest in auditory science is to elucidate the mechanisms of antibody induced hearing loss and to develop a better understanding of autoimmune hearing loss in patients.

We developed a monoclonal antibody, KHRI-3, that binds to a prominent supporting cell antigen as part of a project to define unique proteins expressed in the inner ear (Zajic et al, Hearing Research 1991). See Figure 1.

In the course of analyzing this novel protein, we discovered that mice carrying the KHRI-3 hybridoma that develop high circulating antibody titers also suffer loss of hair cells in the basal turn of the cochlea and high frequency hearing loss (Nair et al. Hearing Research 1995). That the antibody binds to supporting cells in vivo and causes the hearing loss and damage to the organ of Corti has been confirmed by infusion of highly purified antibody into the cochlea of guinea pigs. See Figure 2.

We are currently studying the mechanism of hearing loss in animals. It appears that the staining pattern changes with scar formation and each hair cell scar exhibits a circular or oblong KHRI-3 staining pattern.  See Figure 3.

We are currently working to isolate, purify, and sequence the inner ear target protein.

Based on our studies in guinea pigs we developed assays to detect inner ear antibodies in sera from patients suspected of having autoimmune hearing loss. We used guinea pig tissues as substrate based on the concept that the antigen might be conserved across species. Our results showed that patients' sera contain antibodies that stain a ~68 kDa band in inner ear extracts. These sera also bind to supporting cells with a pattern similar to that of KHRI-3. Se Figure 4.

The antigens identified by KHRI-3 and human sera have similarities and may be the same protein. In fact, a 68-72 kDa protein precipitated by KHRI-3 is strongly stained by sera from patients with sudden onset and rapidly progressive hearing loss. See Figure 5.

Using the KHRI-3 antibody, we immunoaffinity purified the guinea pig inner ear supporting cell antigen. The purified antigen was sequenced with tandem mass spectrometry which identified 10 peptides that are identical in sequence to a putative human protein called CTL2, a member of the choline transporter-like family of proteins. We raised antibodies to synthetic peptides within CTL2 that are based on the identical amino acid sequence of human and guinea pig. The antibodies were used to show that CTL2 is identical to the KHRI-3 antigen (see Figures 6a, 6b, and 6c below) and that CTL2 is abundantly expressed in the human inner ear (Nair, et al., J Neurosci 24:1772-1779, 2004). See Figure 6.

CTL2 contains 10-11 transmembrane domains and has characteristics of transporter proteins. A proposed transmembrane structure for the CTL2 protein is shown in Figure 7.