The U-M Vestibular Testing Center (VTC) is a clinical laboratory for patients with vestibular disorders. Within the VTC is a Human Subjects Laboratory that includes a high acceleration motion simulator, a sophisticated 3D projection system for visual imagery, and high speed (100-400 Hz sample rate) 3D-eye trackers.

The VTC is involved in clinical studies of normal oculomotor and vestibular function and of the effects of ototoxicity in patients who receive aminoglycoside antibiotic treatments. Additional studies include basic research on eye movements and normal vestibular function.

In association with the UROP program, several Michigan undergraduates have studied predictive tracking of virtual images that appear to move in depth. Using dual projectors and polarizing lenses, each eye is shown a slightly different image than is seen by the other eye. When these images are fused, i.e., perceived as a single virtual object, the object appears to move in depth toward or away from the subject (as in 3D movies). The students have shown that subjects can predictively track the perceived 3D-trajectory of virtual images. These experiments suggest that there is a cortical representation of the target's trajectory that is remembered and can be used to generate eye movements. The figure below illustrates an example of a subject pursuing a virtual target that is blanked (hidden) after the onset of motion. Despite the absence of a visible target, the subject tracks the remembered target trajectory with smooth pursuit and saccadic eye movements. 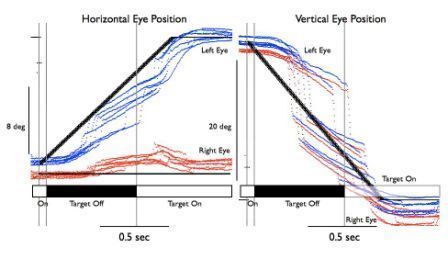 The lab collaborates with Dr. Johannes van der Steen's lab in the Netherlands to study the translational VOR and smooth pursuit eye movements in humans. The translational VOR produces eye movements that compensate for linear movement of the head in space. A complexity of this reflex is that the magnitude of the compensatory eye movements must be scaled inversely with viewing distance. How does the brain know how distant viewed objects are? Many cues might be used; for example, vergence angle, the angle between the lines of sight of the two eyes, is inversely proportional to viewing distance. Recent experiments in van der Steen's Rotterdam lab show, however, that if vergence angle is dissociated from viewing distance, the VOR produces accurate compensatory eye movements. 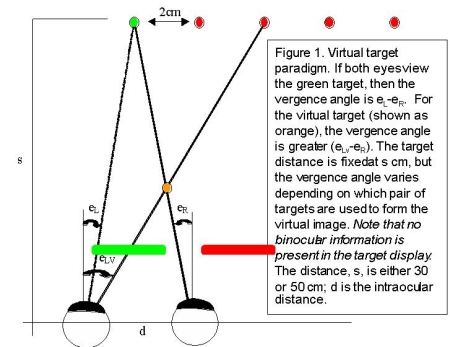