Molecular Mechanisms and Protection in NIHL

The studies described in this section reflect work performed not only in the Miller Laboratory but also substantial efforts by Drs. Richard Altschuler, Colleen Le Prell and Jochen Schacht and their students. Important contributions to this work have also been made by recent post-doctoral research fellows, including Dr. Shujiro Minami, Yoshi Ohinata, Daisuke Yamashita, and Tatsuya Yamasoba.

Noise-induced hearing loss (NIHL) continues to be the primary cause of acquired hearing loss in the industrialized world. The purpose of this program of research has been to enhance our understanding of the mechanisms involved during the destruction of the sensory cells of the inner ear NIHL and to develop preventative interventions to alleviate hearing impairment as a result of noise.

NIHL is caused by a combination of three factors. The first is a direct mechanical trauma to the delicate cells and tissues of the inner ear as a result of intense vibration of these structures by loud noise. The membranes of the sensory (hair) cells and the "hairs" (stereocilia) on the hair cells are literally torn apart. This occurs at the highest levels of intense noise exposure, and can occur with very brief exposures to intense sound, e.g., an exploding firecracker. At lower exposure levels, hearing loss is also caused by an "overdriving" of the sensory cells of the hearing part of the inner ear, the cochlea. That is, due to the intense metabolic activity induced by a relatively high level of noise, over a sufficient period of time, the hair cells will undergo "oxidative stress," which can result in cell death. A third factor contributing to NIHL is vasoconstriction-induced reduction in cochlear blood flow (CBF). Research in our laboratory focuses on the latter two mechanisms: oxidative stress and reduced CBF.

Under metabolically induced oxidative stress, cells form highly reactive molecules (i.e., free radicals), which rapidly create chemical reactions with other molecules that determine the structure and function of the cell. Thus, they react with the molecules that make up the cell wall (phospholipid), changing their structure and compromising the integrity of the cell wall by literally making holes in it, and allowing the ionized form of calcium (Ca2+) to enter. Intracellular Ca2+ is critical for cell function; however, for normal cell function, it is critical to maintain Ca2+ within a narrow range of concentration. Free radicals may also react directly with DNA to produce genetic mutations. Finally, free radicals may interact with "transcription factors," which control gene expression, causing, for example, an abnormal upregulation of those genes that induce cell death.

We have shown that free radicals form in the inner ear (lateral wall, organ of Corti, and auditory nerve) during noise exposure. By measuring lipid peroxidation (free radical induced changes in the membranes of cells), we obtained a direct measure of the influence of free radicals in the inner ear following noise. Following a five-hour intense noise exposure, lipid peroxidation showed a 30-fold increase. When we examined the tissues with the greatest noise-induced lipid peroxidation with selected staining (immunohistology), we found immunostaining in the same tissues that show the greatest noise-induced increase in glutathione (an important free radical scavenger). We interpret glutathione up-regulation as an endogenous protective mechanism to "scavenge" the increase in free radicals induced by the intense noise exposure. Preventing the formation of glutathione via administration of the drug L-buthionine-[S,R]-sulfoximine (BSO) produced a major increase in NIHL and sensory cell damage in comparison to subjects that had a normal functioning scavenger system. Administration of a form of glutathione that may enter cells reduces, by approximately half, the effects of an intense noise exposure. These data suggest that administration of an agent that increases the function of normal scavenger systems or adds scavengers to the inner ear can reduce NIHL. 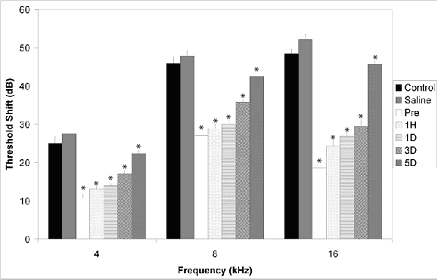 Reprinted from Yamashita, et al., 2005, Neuroscience, 134, 633-642. Treatment with salicylate and Trolox initiated prior to sound trauma protects against hearing loss (measured as ABR threshold). Protective effects diminish with delay in treatment, although some protection is observed even with a 5-day delay in the onset of treatment.

Recent research has shown the key role of free radical formation and reduced inner ear blood flow in NIHL. The extent, distribution, and timing of free radical formation have been defined, including a clinically significant late formation of free radicals in the 7 to 10 days following noise exposure. In addition, we have shown that by administering a combination of antioxidant agents (salicylate and trolox) prior to or up to 3 days following an exposure to intense sound, we significantly reduce threshold deficits, hair cell damage, and ROS and RNS formation. Threshold protection is illustrated in the graph at right.

Other experiments have revealed that administering a growth factor [glial derived neurotrophic factor (GDNF) or neurotrophin-3 (NT-3)], which helps to maintain intracellular Ca2+ within a normal physiologic range, can also reduce NIHL. In addition, we have found that with a combined application of GDNF plus a radical scavenger, we can observe an additive protective effect of the two agents.

Our laboratory has a long-standing interest in cochlear perfusion, having examined CBF during noise, noise effects on the cochlear vasculature and CBF and recovery, and the evaluation of agents that modify the effects of noise on the inner ear vasculature and CBF. The mechanism underlying noise-induced reduction in inner ear blood flow has finally been identified with the development of laser Doppler flowmetry as a tool for dynamic measurement of CBF. We have now shown that the long-observed anomalous noise-induced reduction in CBF is due to the formation of the bioactive product 8-iso-PGF2. Isoprostanes are known to be markers of oxidant stress and tissue damage, and some are potent vasoconstrictors. Using laser Doppler flow assessment, we demonstrated that infusion of the isoprostane 8-iso-PGF2 generates a rapid and concentration-dependent blood pressure and CBF response, followed by a recovery toward baseline over a few minutes. Other studies further demonstrate the specificity of this effect through the use of a localized vascular injection of isoprostanes at the level of the anterior inferior cerebellar artery (AICA).

Reprinted from Le Prell et al. 2007, Free Rad. Biol. Med.,42, 1454-1463. A. Noise-induced hearing loss in guinea pigs, estimated using auditory brainstem response thresholds prior to and 10 days post noise (octave-band noise centered at 4 kHz, 120-dB SPL, 5 hours), was reduced by treatment with a combination of vitamins A, C, E and magnesium (ACEMg), but not by treatment with the antioxidants (ACE) or magnesium (Mg) (*) Asterisks indicate statistically reliable differences (p�s < 0.001) between ACEMg and all other groups. B. Outer hair cell loss in the 10-15 and 15-20 mm from the apex segments of the cochlea was reliably reduced when group comparisons were limited to the two groups most crucial to testing our hypothesis: saline and combination treatment with antioxidants and magnesium.

Given the clear benefits of both antioxidant agents and those that preserve the blood supply to the cochlea during and after a noise insult, we recently evaluated the possibility of synergistic interactions between free radical scavengers (beta-carotene, and vitamins C and E) and one of the agents that prevents constriction of the cochlear blood supply, magnesium. Prevention of noise-induced hearing loss was significantly reduced using this dietary micronutrient treatment as illustrated in the graph at right.

Our new mechanistic insights and findings of safe and effective interventions that attenuate NIHL provide a rich and growing scientific rationale to justify human trials to eliminate this most important cause of acquired hearing loss. We are now actively planning clinical trials with our US and international colleagues to test this combination of antioxidants and other dietary supplements in human models of NIHL, including, for example, recreational, occupational and military noise exposures.