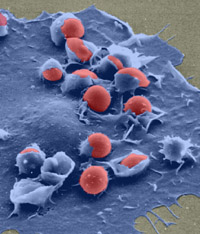 Modern developments in molecular biology were followed by rapid expansion in this area during the l970's under the leadership of Dr. Frederick C. Neidhardt. With Dr. Harry Mobley as the chair, laboratories in our department conduct research in many diverse and exciting fields of molecular and cellular biology.

Research interests of investigators include: gene regulation in prokaryotes and eukaryotes; molecular biology of animal and bacterial viruses; molecular basis of microbial pathogenesis integrated behavior of complex molecular and cellular networks; as well as structure, function, and molecular genetics of immunoglobulins, T-cell receptors and cell surface antigens. This interdisciplinary approach adds a dynamic dimension to the Department's already outstanding tradition in microbiology and immunology.

The Department of Microbiology & Immunology is the eleventh site in the United States to be named a historical site by the American Society for Microbiology. Learn more about our Milestones in Microbiology celebration.

The 110 years of Microbiology and Immunology PowerPoint presentation.

Please note: This is a large file which may take a few moments/minutes to open.