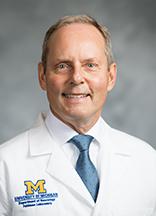 Dennis Michael (Mike) Ritter, M.D. is the managing director of the ALS Center of Excellence at Michigan Medicine. He has oversight of the strategic direction of the Center and its Board of Directors. In addition to providing leadership at the executive level, he collaborates with board members to foster public awareness of ALS, expand marketing efforts through written and visual materials, and assist with the fulfillment of fundraising goals.

Prior to joining the ALS Center of Excellence in 2018, Dr. Ritter served as the medical director of the Preoperative Assessment Clinic at Mercy Medical Center in suburban St. Louis for 27 years. At Mercy Medical Center, a 900-bed hospital, he established and managed one of the highest volume pre-operative clinics in the country. He was also on staff at St. Luke’s Hospital in St Louis.

His first academic posting was at Emory University where he was an assistant professor and director of liver transplantation for the anesthesia department. He was recruited after several years to St. Louis University, where he became the director of liver transplantation. He was then invited to enter private practice by former colleagues, and was a member of Western Anesthesia Associates at Mercy Medical Center.

A native of St. Clair Shores, Michigan, Dr. Ritter is a graduate of the University of Michigan, with a B.S. in microbiology. He attended University of Michigan Medical School and graduated in 1983. He began a general surgery/orthopedics internship at the University of North Carolina in Chapel Hill. He transferred to an anesthesiology residency in his second year, and remained at the University of North Carolina until completion. Dr. Ritter then completed a fellowship at the Mayo Clinic in liver transplantation and critical care and did research in the areas of hematology and coagulation on patients with chronic liver disease. He also studied in England in the area of cardiac anesthesia and transplantation.