Returning to an in-person event this year, the American Neurological Association (ANA) annual meeting drew a strong contingent of scientists from the NeuroNetwork for Emerging Therapies to Chicago, some of whom were attending the conference for the first time.

On Sunday at the conference, ANA President Frances Jensen, M.D., FANA, FACP, chaired the Presidential Symposium, entitled “Neurologic Dark Matter: Exploring the Exposome That Drives Neurological Disorders.”  This plenary session was inspired by a recent National Academy of Medicine Neuroscience Forum, the session provided an overview of what is known about neurotoxic exposures and how they lead not only to neurodevelopmental disorders but a wide range of other neurological and neurodegenerative conditions. The symposium also considered the consequences of public health and medical care disparities and discussed research gaps and collaborative opportunities for neuroscientists and environmental health scientists. 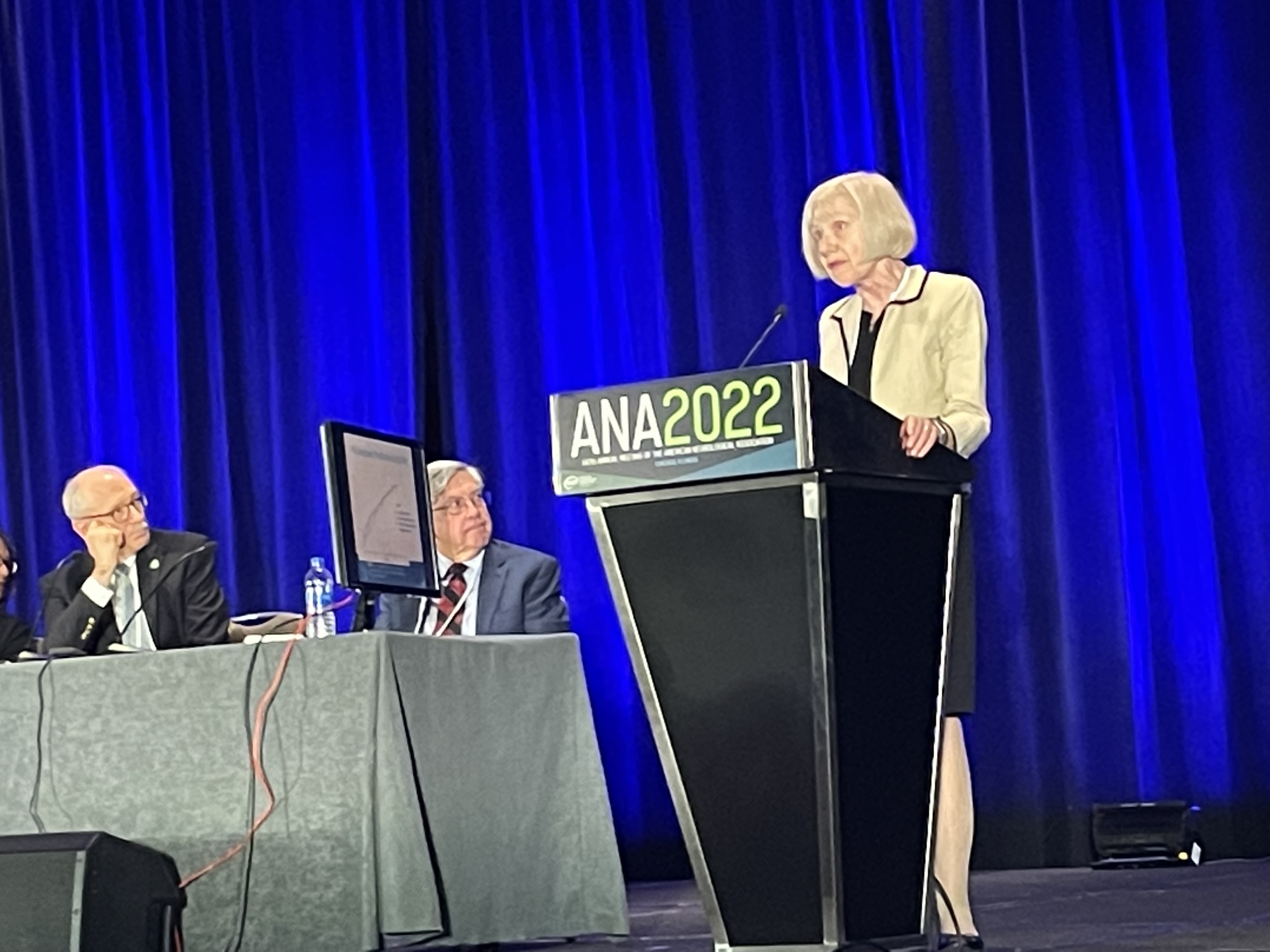 “This symposium brought to light the fact that we as a neurologic community need to acknowledge the role of environment pollutants in the problems we are seeing in the nervous system,” explained Eva Feldman, M.D., Ph.D., one of the session’s featured speakers.  “We have to acknowledge that there is a clear association between the exposome – what that they are calling in this seminar “dark matter” – and neurologic disease.”  The exposome refers to the entirety of an individual’s environmental exposures during a lifespan — chemicals, but also factors such as psychological stress and diet.

Moderated by an incredible duo of Walter J. Koroshetz, M.D., Director of the National Institute of Neurological Disorders and Stroke (NINDS), and Rick Woychik, Ph.D., Director of the National Institute of Environmental Health Sciences (NIEHS), this session inspired by recent and emerging research revealing the exquisite sensitivity of the nervous system to environmental toxicants. Environmental neurotoxicology is a relatively new scientific area, whereas pollutants and other exposures have long been studied for their roles in neurodevelopment, other organ systems, immune disorders, and cancer.

“The director of the NIEHS gave a brief talk and said what’s critical is to look at the gene-time-environment intersection,” explained Dr. Feldman.  “This is the hypothesis and focus of our ALS transformative grant, so it’s really come full circle.”

Another highlight of the ANA meeting was the NeuroNetwork’s bright young researchers.  On Monday, Stephanie Eid, Ph.D., was awarded the Wolfe Research Prize for Identifying New Causes or Novel Treatment of Neuropathy.  This prestigious honor is the top neuropathy research award to an early-career investigator, who along with the prize is asked to present a lecture at the conference. 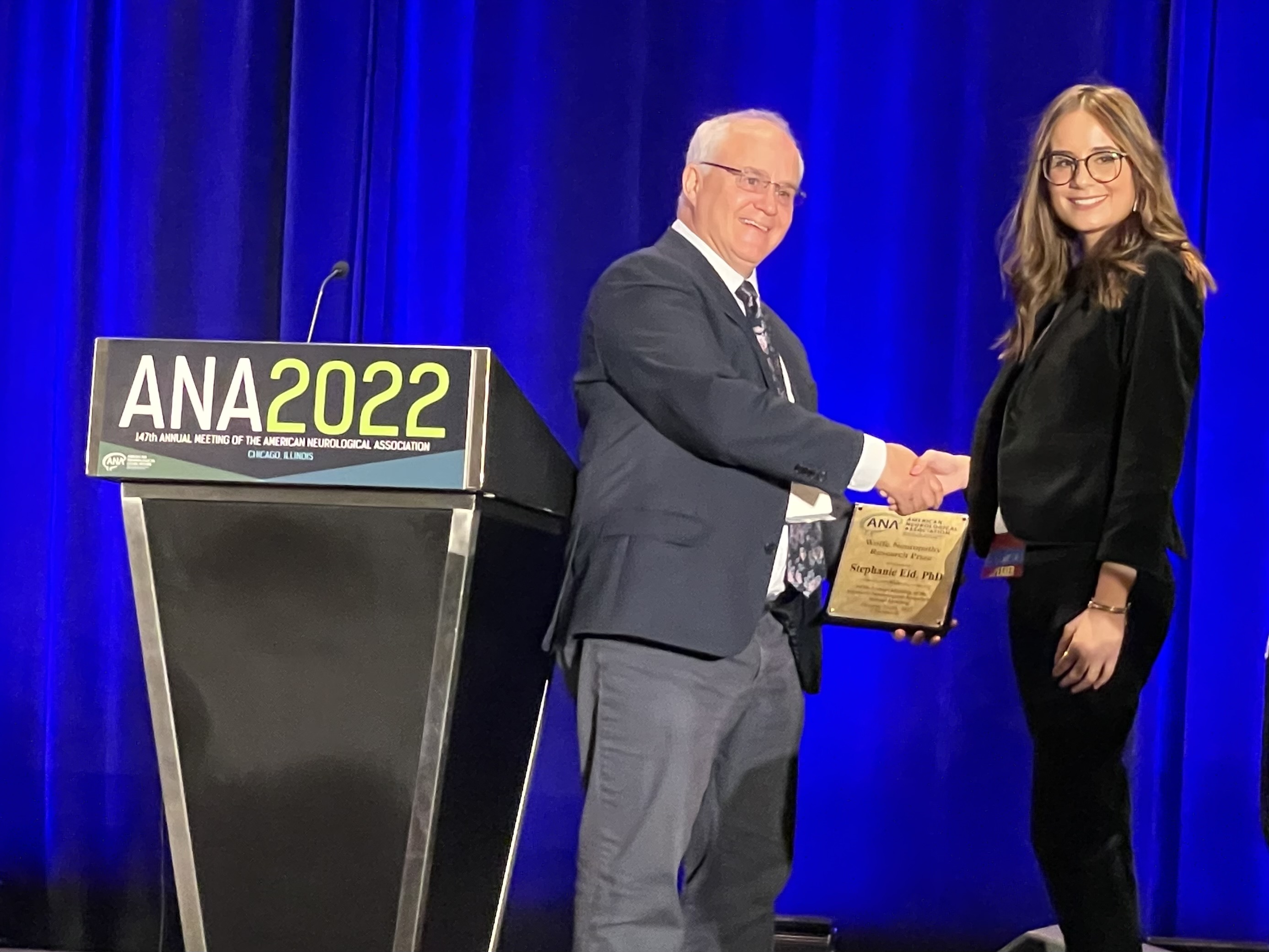 “Stephanie winning the Wolfe Prize is confirmation of her clear scientific excellence in the field of neuropathy,” said Dr. Feldman. “Her talk was superb. What she is able to do is take fairly difficult technical concepts and explain them to a broader audience.

Afterwards, many people came up and said that because of her talk for the first time they understood the crosstalk between Schwann cells – the supporting cells of nerves – and axons, how the coupling of these two structures can support normal nerve health. But she also explained how and why they become uncoupled in diabetic neuropathy and how we can potentially develop therapies to restore the coupling.  She really did a beautiful job and really explained her science well.”

What is it like to win such an award?

“It is an absolute honor to receive the Wolfe research prize from the ANA at this stage of my career,” explained Dr. Eid.  “The recognition is incredibly encouraging and serves as a challenge to continue to focus on the most meaningful problems, develop disease-modifying therapies and improve patients' quality of life. I was humbled to share the stage with leading researchers across all fields of neurology and neuroscience.”

Recognition of the NeuroNetwork’s efforts didn’t end there.  r lab members were chosen to present their research during poster presentations.

One such example is Mohamed Noureldein, Ph.D., who received immensely positive feedback for his talk on how energy utilization in the brain is orchestrated by different cell types and how obesity and diabetes disrupt this. 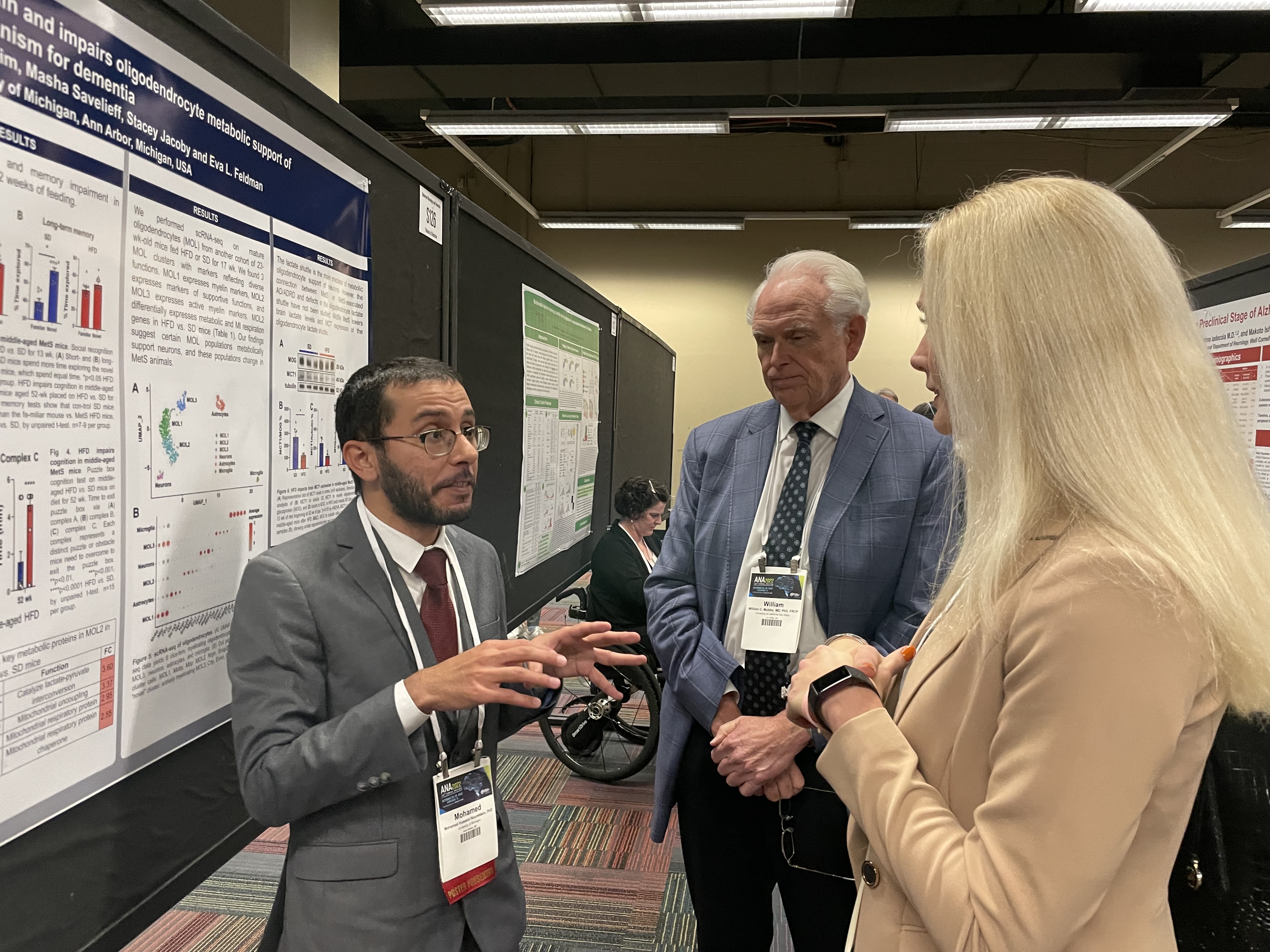 “My favorite thing about the ANA is that it includes both basic scientists and clinicians,” explained Dr. Noureldein. “This is so important as it gives a perspective on translational research and how science evolves from the bench to bedside.”