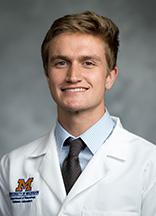 Scott Dent is a study coordinator who started with the ALS Center of Excellence in May 2019. His role as study coordinator involves enrolling patients in research studies, coordinating bio-sample collection, and the entering & querying of data sets. This work includes performing clinical outcome measures on ALS patients, including the ALS Functional Rating Scale Revised (ALS-FRS-R) and the Cognitive Behavioral Screen (CBS). He is is also responsible for scheduling and enrolling control subjects for studies.

Scott is a graduate of the University of Michigan (2019), earning a B.S. in neuroscience. Scott plans on pursuing a professional degree in the field of genetic counseling.

Mr. Dent is  study coordinator for the ALS Center of Excellence by assisting  investigators in the Department of Neurology by enrolling patients in research studies, coordinating bio-samples and collecting patient data. This includes preforming clinical outcome measures on ALS patients, which then gets paired with observational data gathered for the research studies.  Dent is also responsible for enrolling control subjects for these same studies.  He is a recent graduate of the University of Michigan (2019) and earned a B.S. in Neuroscience.