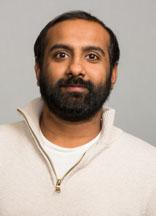 The major goal of our research program is to determine the molecular mechanisms by which oxygen sensing transcription factors regulate gastrointestinal homeostasis, inflammation and cancer. Cellular oxygen level is an important systemic signal that modulates metabolic activities and disease in the liver and intestine. Low cellular oxygen also referred to as hypoxia is observed in several gastrointestinal diseases such as non-alcoholic and alcoholic fatty liver disease, inflammatory bowel disease and liver and colon cancers. Regulation of hypoxia-mediated genes is dependent on the nuclear transcription factor, hypoxia inducible factor (HIF). HIF signaling is critical in the adaptive response to low oxygen levels by activating genes involved in metabolism, angiogenesis, cell survival and iron metabolism. Using the latest in mouse transgenic technology we have developed novel animal models to study accurately the role of oxygen sensitive transcription factors in the liver and intestine. These studies have revealed new pathways that have not previously been associated with hypoxia. Our laboratory is involved in three major areas of focus:

(i) The role of HIF in iron metabolism: Using genetic mouse models and cell lines, HIF was shown to be a critical regulator of iron absorption following nutritional iron deficiency. Disruption of HIF signaling in the intestine results in low systemic iron and hematological defects, whereas a chronic increase in HIF signaling led to iron overload. These findings indicate a previously unknown and essential role for intestinal HIF signaling in responding to nutritional iron deficiency. Current goals are focused on understanding the precise molecular mechanisms by which HIF regulates iron absorption.

(ii) The role of HIF in the progression of inflammatory bowel disease and colon cancer: We have demonstrated that mice and colon-derived cell lines overexpressing HIF triggers an inflammatory response leading to spontaneous colitis. Due to the well-characterized role of hypoxia and HIF in several aspects of tumorigenesis, current goals are to assess if HIF signaling is a critical link between inflammation and cancer.

(iii) The role of HIF in the progression of fatty liver disease and steatohepatitis: Hypoxia or overexpression of HIF in the liver leads to the development of hepatocellular steatosis, which progresses into steatohepatitis. Chronic induction of HIF signaling leads to hepatomegaly and vascularized liver tumors. Current goals are to assess the molecular mechanisms by which HIF regulates fatty acid metabolism and inflammation, and identify key molecular events, which increase the progression of fatty liver disease to steatohepatitis and eventually liver tumors.