Abstract: Brain machine interfaces or neural prosthetics have the potential to restore movement to people with paralysis or amputation, bridging gaps in the nervous system with an artificial device. Microelectrode arrays can record from hundreds of individual neurons in motor cortex, and machine learning can be used to generate useful control signals from this neural activity. Performance can already surpass the current state of the art in assistive technology in terms of controlling the endpoint of computer cursors or prosthetic hands. The natural next step in this progression is to control more complex movements at the level of individual fingers. Our lab has approached this problem in three different ways. For people with upper limb amputation, we acquire signals from individual peripheral nerve branches using small muscle grafts to amplify the signal. After a successful study in animals, human study participants have recently been able to control individual fingers online using indwelling EMG electrodes within these grafts. For spinal cord injury, where no peripheral signals are available, we implant Utah arrays into finger areas of motor cortex, and have successfully decoded flexion and extension in multiple fingers. Decoding “spiking band” activity at much lower sampling rates, we recently showed that power consumption of an implantable device could be reduced by an order of magnitude compared to existing broadband approaches, and fit within the specification of existing systems for upper limb functional electrical stimulation. Finally, finger control is ultimately limited by the number of independent electrodes that can be placed within cortex or the nerves, and this is in turn limited by the extent of glial scarring surrounding an electrode. Therefore, we developed an electrode array based on 8 um carbon fibers, no bigger than the neurons themselves to enable chronic recording of single units with minimal scarring. The long-term goal of this work is to make neural interfaces for the restoration of hand movement a clinical reality for everyone who has lost the use of their hands. 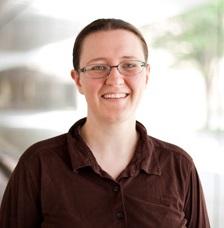 Cynthia A. Chestek received the B.S. and M.S. degrees in electrical engineering from Case Western Reserve University in 2005 and the Ph.D. degree in electrical engineering from Stanford University in 2010. From 2010 to 2012, she was a Research Associate at the Stanford Department of Neurosurgery with the Braingate 2 clinical trial. In 2012 she became an assistant professor of Biomedical Engineering at the University of Michigan, Ann Arbor, MI, where she ran the Cortical Neural Prosthetics Lab. The lab focuses on brain and nerve control of finger movements as well as to high-density carbon fiber electrode arrays. She now holds the title of associate professor, at the University of Michigan. Dr. Chestek is the author of 34 full-length scientific articles.

Dr. Chestek’s research focuses on brain machine interface (BMI) systems using 100 channel arrays implanted in motor and pre-motor cortex. The goal of this research is to eventually develop clinically viable systems to enable paralyzed individuals to control prosthetic limbs, as well as their own limbs using functional electrical stimulation and assistive exoskeletons. To move towards arm control, she is particularly interested in algorithms that better model the non-linear relationship between neural activity and the complex biomechanics of the arm. Other research areas include developing mitigation strategies for non-stationarities in neural recordings over time, and implantable wireless systems. Such systems can eliminate the transcutaneous infection risk associated with current BMIs, as well as expand the number of independent channels in the neural interface.