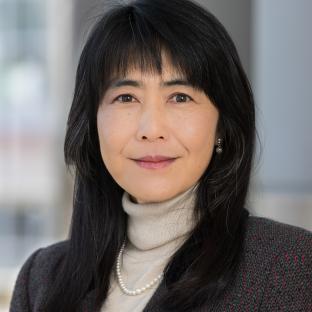 A Japan native, Hiroko Dodge completed her graduate work in demography and statistics at Pennsylvania State University, followed by a post-doc at Carnegie Mellon University.  After serving as a faculty member at University of Pittsburgh (a primary appointment in the Department of Epidemiology and a secondary appointment in Biostatistics), she transferred to the Department of Neurology and the Alzheimer’s Disease Center  (ADC) at Oregon Health & Science University (OHSU) in Portland, Oregon, directing the Data Core at Oregon ADC.  In 2010, she was asked to join the Michigan Alzheimer’s Disease Center to lead their Data Core and re-establish it as a National Institutes of Health (NIH)-funded center. Since then, she has successfully directed two Biostatistics and Data Management Cores, one at the Layton Aging and Alzheimer’s Disease Center at OHSU and another at the University of Michigan Alzheimer’s Disease Center. This dual position is facilitating cross-center collaborations. Her applications of complex statistical models to epidemiological data and digital biomarkers are recognized internationally. Along with her strong quantitative background, she has been continuously funded by the NIH as Principal Investigator for behavioral intervention clinical trials to examine whether stimulation through social interactions using modern communication technologies (personal computers, webcams and the internet) can improve cognitive function. She also has research cohorts in Okinawa, Japan, where she conducts cross-cultural comparative studies on healthy cognitive aging, supported by the Japan Grants-in-Aid for Scientific Research. She is the founding Chair of the Clinical Trials Advancement and Methods Professional Interest Area (PIA) and serves as an Advisory Council member for the International Society to Advance Alzheimer's Research and Treatment (ISTAART), the groups supported by the Alzheimer’s Association. She is a Fellow at the Gerontological Society of America. She also serves as the Senior and Statistical Editor for a number of journals in dementia research including Alzheimer’s & Dementia, Alzheimer’s & Dementia: Translational Research and Clinical Intervention (TRCI), International Psychogeriatrics and Journal of Alzheimer’s disease.