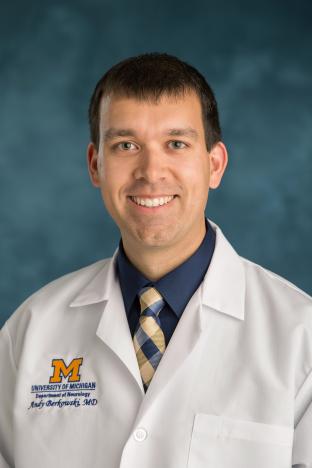 A native of Southeast Michigan, Andy Berkowski earned a bachelor’s degree in religious studies from Stanford University before returning to Detroit to obtain his medical degree at Wayne State University. He completed a transitional year internship at Henry Ford Hospital and residency in adult neurology at the Detroit Medical Center/Wayne State University. He received fellowship training in sleep medicine at Stanford University before joining the faculty of Michigan Medicine.

Dr. Berkowski’s academic work is focused on the clinical management of restless legs syndrome (RLS) including the clinical effects of dopaminergic augmentation and its reversal, along with the role of iron in the treatment of RLS. He serves as a member of the American Academy of Sleep Medicine’s Clinical Practice Guideline Task Force on Restless Legs Syndrome. Additionally, he maintains several administrative roles with the University of Michigan Sleep Medicine Fellowship Program including the chair of the Clinical Competency Committee.

Research interests: Restless legs syndrome, the role of iron in the treatment of RLS, and the effects of dopaminergic augmentation and its reversal.

Do You Have Restless Leg Syndrome Or Are You Just Fidgety?