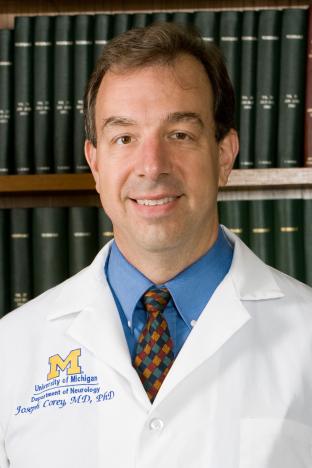 Joseph M. Corey, MD, PhD (Residency 2002), is an assistant professor of neurology in the University of Michigan Medical School and a staff neurologist at the VA Ann Arbor Healthcare System. He also holds an appointment as an attending neurologist in the U-M Health System.

Dr. Corey joined the U-M faculty in 2002 as a lecturer in the Department of Neurology. He was promoted to his current position of assistant professor of neurology in 2005.

He earned his Bachelor of Arts in chemistry and mathematics/physics in 1987 from Albion College followed by a Master of Science in biomedical engineering in 1990 from Case Western Reserve University. At the University of Illinois, he completed his doctorate in neuroscience in 1997 and his medical degree in 1998 as part of the Medical Scholars Program. After completing his internship in internal medicine in 1999 at St. Joseph Mercy Hospital in Ann Arbor, Dr. Corey completed his residency in neurology in 2002 at the U-M. He also did a neurology clinical and basic science fellowship here from 2002-04.

Dr. Corey's research interests include nerve regeneration using novel biomaterials; nanotechnology; development and maturation of neuronal cells and glia, and their differentiation; neuroelectronic interfaces and neural prostheses; and rehabilitation and prognosis after neurologic injury. As a faculty member, his research has been funded by the National Institute of Biomedical Imaging and Bioengineering at NIH, the Paralyzed Veterans of America, and the Department of Veterans Affairs.

His honors and awards include a University of Illinois College of Medicine Research Grant, Outstanding Teaching Assistant awards from the UIUC School of Life Sciences, and a National Institutes of Health Developmental Neurobiology and Psychobiology Fellowship.

A member of the American Academy of Neurology, Biomedical Engineering Society, and Society for Neuroscience, he has contributed more than 10 peer-reviewed publications and numerous abstracts, preliminary communications and panel discussions.

Recovery from neurologic injury and neurorehabilitation.