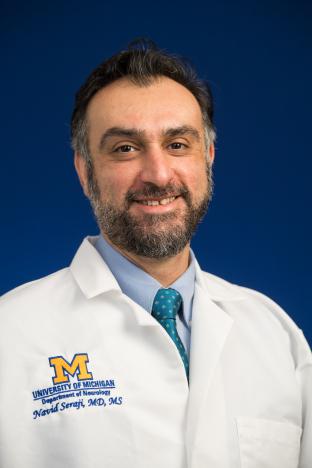 Navid Seraji-Bozorgzad, MD, is an associate professor of neurology in the University of Michigan Medical School.

Dr. Seraji-Bozorgzad began work in the area of medical imaging in 1990 as a research assistant during his undergraduate studies at the University of Michigan. He became familiar and developed a fundamental understanding of image acquisition and processing from his work on solid-state imaging arrays. After undergraduate work, he worked in the private sector as a software engineer, designing databases for various companies, including Ford Motor Company, and Liberty Mutual Insurance. The work provided him with experience in data-mining and manipulation of large datasets.

His passion for medicine eventually led him to medical school. During the application process he worked in the Department of Psychiatry and Behavioral Neurosciences, and eventually enrolled in graduate school in neuroscience. While in the Department of Psychiatry, he participated in the use of various MR imaging techniques, including magnetic resonance spectroscopy and functional MRI for diagnosis and disease progression in mood disorders, including bipolar disorder. It was during his graduate studies that he developed an interest in the field of neurodegeneration, regeneration and neuroprotection.

His bibliography includes numerous peer-reviewed jornals and publications, abstracts and other media.