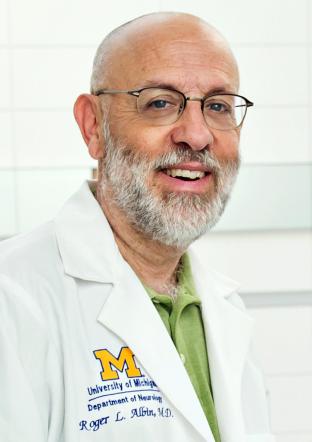 Roger L. Albin, MD, is a professor of neurology and co-director of the Movement Disorders Clinic in the Department of Neurology in the University of Michigan Medical School. In addition, he serves as chief of neuroscience research at the VA Ann Arbor Healthcare System Geriatric Research Education and Clinical Center.

Dr. Albin joined the University of Michigan faculty in 1988 as an instructor in the Department of Neurology. He was promoted to assistant professor in 1989; associate professor in 1994; and achieved his current rank of full professor in 2000.

After completing his undergraduate degree at Oberlin College in Ohio, Dr. Albin earned his medical degree from the University of Pittsburgh School of Medicine in 1982, and completed his residency at the University of Michigan in 1986. He also completed a movement disorders fellowship in 1988 under Drs. Anne Young and John Penney.

His clinical and research interests include the underlying pathophysiology of basal ganglia disorders. The present focus of Dr. Albin's research is uncovering the basis for non-motor (sleep disorders, depression, dementia, autonomic dysfunction) problems in Parkinson's disease. Molecular imaging with Positron Emission Tomography (PET) methods is a primary research tool.  The hope is that understanding how specific brain alterations cause specific clinical features will lead to improved treatments.

Research: Understanding the basis for the clinical features of different Movement Disorders.

NIH Awards the University of Michigan $11.7 Million to Fund a Udall Center of Excellence for Parkinson's Disease Research