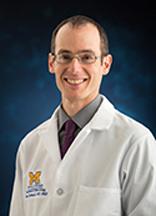 Dr. Barmada received his PhD in the Medical Scientist Training Program at Washington University in St. Louis, where he investigated prion diseases with Dr. David Harris, now chair of Biochemistry at Boston University. His neurology residency, at the University of California, San Francisco (UCSF), gave him the opportunity to train with some of the premier clinicians and scientists in neurodegenerative diseases, including Dr. Bruce Miller, head of the UCSF Memory and Aging Center, and Dr. Cathy Lomen-Hoerth, Director of the UCSF ALS Center. During residency and continuing in a postdoctoral fellowship, he worked with Dr. Steve Finkbeiner at the Gladstone Institutes in San Francisco, where he established faithful model systems for the study of ALS and FTD pathogenesis, including one of the first human neuronal models of familial ALS and FTD. Dr. Barmada arrived at the University of Michigan as an Assistant Professor of Neurology in 2013, and was promoted to Associate Professor in 2020.

Dr. Barmada’s research takes advantage of a broad toolkit of innovative technologies and methods involving fluorescence microscopy, computer science and engineering, bioinformatics, genome engineering and molecular biology to investigate important yet unanswered questions in neurodegenerative diseases. His work, centering on critical abnormalities in RNA and protein metabolism in ALS and FTD, combines basic biology with translational research and technology development. Dr. Barmada serves on the executive advisory board of the Robert Packard Center for ALS Research, and acts on the scientific advisory boards of the Live Like Lou Foundation and Synapticure, Inc. He has taken an active role in their efforts to raise awareness of ALS in the community, and participates in several local and national fundraising efforts. In recognition of the impact and promise of his original research, Dr. Barmada was awarded the Young Physician Scientist Award from the American Society for Clinical Investigation in 2014, and he received the distinguished Angela Dobson and Lyndon Welch Research Professorship at the University of Michigan in 2015.

Research: Mechanisms of disease in amyotrophic lateral sclerosis and frontotemporal dementia.
Modeling of neurodegenerative phenotypes in primary and human stem cell-derived neurons and astrocytes.
Identification and characterization of novel therapies for neurodegenerative diseases.

Ann Arbor, MI – The work of affiliates of the Michigan Alzheimer’s Disease Research Center captured the attention of the Journal of Biological Chemistry last week for their new findings which could change the trajectory of treatment for key neurodegenerative diseases such as Alzheimer’s disease, Parkinson’s disease, frontotemporal dementia and