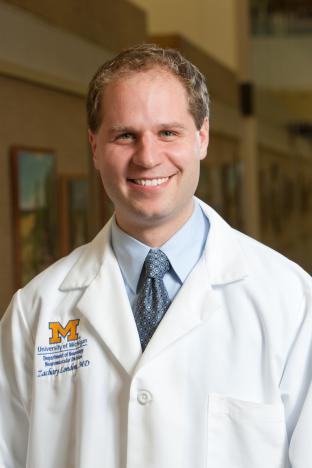 He joined the University of Michigan faculty as a neuromuscular neurologist in 2006, and has served as Program Director of the neurology residency program.

Dr. London’s scholarly focus is the development of interactive educational tools. He created EMG Whiz, a popular web-based EMG training simulator. His work was fundamental in the development of two mobile applications to teach the tenets of neuroanatomic localization, Nerve Whiz and Neuro Localizer. He also co-designed and published The Lesion: Charcot’s Tournament, a tabletop strategy board game about neuroanatomy. He has published online learning modules for the American Academy of Neurology and other national organizations, in addition to traditional publishing research regarding medical education, safety, and pain in electrodiagnostic studies.

Dr. London has been recognized with numerous national teaching awards, including the American Academy of Neurology (AAN) A.B. Baker National Honor Roll of Neurologic Teachers in 2009, the Consortium of Neurology Program Directors Recognition Award in 2014, and the American Neurological Association’s Distinguished Teacher Award in 2017. At the University of Michigan, he received the 2013 Silver Shovel Award, the Provost’s Teaching Innovation Prize in 2015, and, in 2017, the Kaiser Permanente Award. Departmental honors include the Status Pedagogicus Award in 2008, the James Albers Collegiate Professorship in 2018, and the AANEM Innovation Achievement Award in 2020. He served as an honorary member of the GALENS medical society from 2011 to 2020. He serves as faculty advisor for UM neurology students, and faculty liaison for UM’s Student Interest Group in Neurology.

Dr. London regularly speaks at national meetings, provides service to national organizations, committees, and workgroups. He is the immediate past chair of the AAN’s Consortium of Neurology Program Directors and the chair of the American Board of Electrodiagnostic Medicine Examination Committee.

Outside his work, Zach London is a founding board member and secretary of the Penny Seats Theatre Company, in Ann Arbor. He has also composed and released one original song every month since 1993, posting them on his personal website www.hardtaco.org