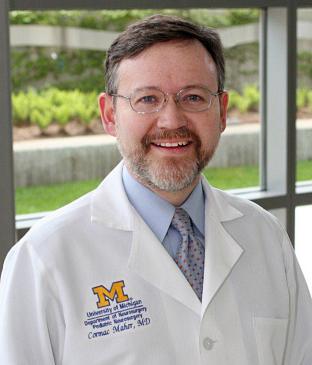 Dr. Maher is a graduate of Georgetown University, where he was elected to the Alpha Omega Alpha Medical Honor Society. He completed his surgical internship and neurosurgical residency at the Mayo Clinic in Rochester, Minnesota. Soon thereafter, he moved to Boston, Massachusetts for dedicated training in pediatric neurosurgery under the direction of R. Michael Scott, M.D. of Harvard University and Boston Children's Hospital. During his time in Boston, Dr. Maher served as the Shillito Staff Associate in the Department of Pediatric Neurosurgery at Children's Hospital Boston. After completion of his training at Boston Children's Hospital, Dr. Maher completed fellowship training in cerebrovascular neurosurgery under the direction of Arthur L. Day, M.D of the Brigham and Women's Hospital and Harvard University.

Dr. Maher is an active clinician-investigator and has made over 150 presentations of his work at national medical meetings. He has published a large number of scientific articles as well as book chapters on a wide variety of neurosurgical topics. His work has appeared in many medical journals including the Journal of Neurosurgery, Stroke, Neurosurgery, and Neurology.  He currently serves on the editorial board of the Journal of Neurosurgery: Pediatrics.

Dr. Maher lives in Ann Arbor with his wife and 3 children.