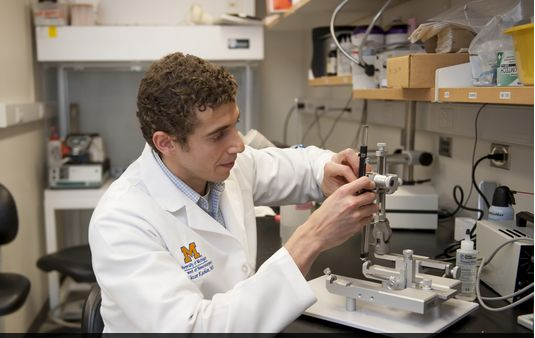 Ann Arbor — Inside a laboratory at the University of Michigan, researchers have been injecting stem cells into the brains of mice engineered to have Alzheimer's disease, and making remarkable discoveries.

The experiments are among the first in the nation to examine how stem cell therapies might alter the course of Alzeheimer's, a fatal disease that afflicts more than 5 million people in the U.S. and is widely regarded as an epidemic predicted to explode as the nation's population ages.

The research is being overseen by UM's Dr. Eva Feldman, who pioneered the nation's first clinical trial using stem cells in patients with amyotrophic lateral sclerosis — a disease that received global awareness last summer thanks to the ALS ice bucket challenge.

While Feldman's ALS trial is not complete, it is showing promise. That's why she began an experiment to see how stem cells might fare in treating Alzheimer's disease, another neurodegenerative disorder.

Although it's very early in the research, the Alzheimer's experiment with mice showed that stem cells made a mouse with Alzheimer's disease indistinguishable in behavior and memory from a mouse that didn't have the disease.

"When you work in science, you do as many experiments that don't work that do," Feldman said. "When you get something that works so beautifully (like this experiment), you can quickly see its translational potential. I am looking at a mouse but some day I could be looking at a man. As a clinician scientist, those are the moments you live for."

(Copied with permission from the Detroit News)