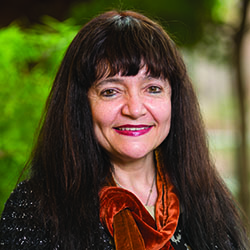 The Department of Neurosurgery is thrilled to announce that Dr. Maria Castro is a 2016 recipient of the prestigious Javits Neuroscience Investigator Award from the National Institutes of Health.

This award will support her ongoing work to make significant advancements in the treatment of brain cancers by discovering the cellular, molecular, and mathematical basis underlying their growth patterns, introducing genetic changes into tumorous cells and thereby preventing cellular propagation and/or destruction of said cells. This work (in both experimental models and in human patients) focuses on glioblastoma multiforme (GBM), the most common and deadliest of adult primary brain tumors.

What is the Javits Neuroscience Award?

The award honors investigators submitting research grant applications for competitive review who have a distinguished record of substantial contributions in a field of neurological science and who can be expected to be highly productive over the next seven years.

“The Javits Award recognizes extraordinary research that has the potential to better thousands of lives,” said Story C. Landis, Ph.D., NINDS director.  “It gives outstanding scientists opportunities to explore innovative, first-rate research which could truly change the way we think about certain diseases and conditions.”

In October 1983, the U.S. Congress mandated the Senator Jacob Javits Awards in the Neurosciences, to be administered by the National Institute of Neurological and Communicative Disorders and Stroke (now the National Institute of Neurological Disorders and Stroke, NINDS). Since the establishment of the program, the NINDS has made approximately 567 awards.

The awards were established to honor the late Senator Jacob Javits (R-NY), who for several years was a victim of amyotrophic lateral sclerosis (ALS), a degenerative neurological disorder also known as Lou Gehrig's disease. Senator Javits was a strong advocate for support of research in a wide variety of disorders of the brain and nervous system.

A Javits Neuroscience Investigator Award (R37) is a conditional seven-year research grant given to scientists selected by the National Advisory Neurological Disorders and Stroke Council from among the pool of competing applicants during a given grants cycle. Competitive R01s judged by the initial review group to be highly meritorious (i.e., usually better than the 5th percentile) are automatically eligible for consideration, provided they exemplify the investigator’s body of work. The award is initially for a period of four years, after which, based on an administrative review, an additional project period of three years may be awarded. Awardees must have demonstrated exceptional scientific excellence and productivity in one of the areas of neurological research supported by the NINDS, have proposals of the highest scientific merit, and be judged highly likely to be able to continue to do research on the cutting edge of their science for the next seven years.