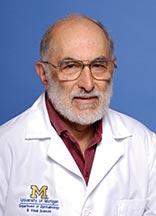 Dr. Daniel Green studies visual adaptation, the ability of the eye to adjust its sensitivity, speed of response and dynamic range as the level of light in the visual environment changes. Adaptation is a very important aspect of normal healthy vision. In the mammalian retina the principal mechanisms for regulating the sensitivity of the rod pathway reside in the neural apparatus beyond the photoreceptor transduction apparatus. That is, the presence (or absence) of light causes changes in the synaptic organization in the retina. These changes involve modifications in the strengths of the connections between cells and in the speed with which signals are processed by the retina. They are a fundamental part of being able to see both at night and during the day. The neural mechanisms of adaptation are of great interest not only because of their importance for vision but also because of their possible relationship to the changes in neural circuitry that are critical to the neural plasticity that underlies higher mental functions such as learning and memory.

For the past several years Dr. Green has been developing an isolated retinal preparation suitable for studying retinal adaptation in the mammalian retina. Using this new preparation he has now begun an intensive study of network adaptation. He employs three general approaches: 1) transretinal electrical currents stimulate retinal elements and evoke neural responses; 2) pharmacological agents act selectively at different classes of synapses to dissect out the contributions of the different retinal neurons to the regulation of sensitivity; and 3) intraretinal and intracellular recordings from cells in the isolated rat retina determine the mechanism by which cells are affected by steady background lights.

The hope is that these studies will enhance our knowledge of the synaptic mechanisms that control sensitivity in the mammalian retina. Insights into this fundamental aspect of vision will serve as a basis for better treatments of retinal diseases in which the processes of light and dark adaptation are compromised.

Dr. Green is also studying the inner and outer retinal contributions to the electroretinogram of animals. The electroretinogram (ERG) is an electrical response that can be measured from the cornea of the eye. The ERG reflects the massed response from all the cells in the retina and consequently is widely used in clinic as a noninvasive test of retinal function. Understanding what cells contribute to the ERG is very important in interpreting abnormalities in the ERGs from patient eyes. Consequently, these studies should lead to a better understanding of disease and could also lead to new and better treatments.