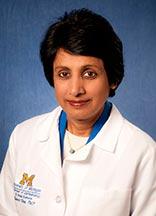 Dr. Naheed Wali Khan is a retinal electrophysiologist who is interested in animal models of human disorders and in human retinal degenerative diseases.  In her research she uses non-invasive retinal electrophysiology to study animal models of human eye disease. Those tests provide objective data with which she can evaluate experimental treatments for hereditary retinal degenerative diseases.

Now that theoretical conceptual frameworks for treating hereditary retinal dystrophies have been established, electrophysiological tools have to be identified and tested to monitor retinal function during the course of treatment trials.  As a result it has become increasingly important to develop objective measures to evaluate retinal function.  As the mouse has become an important laboratory model for retinal diseases, several experimental therapeutic methods are being tested in mouse models of genetic retinal diseases.  The electroretinogram (ERG) is a non-invasive technique used to assess the functional status of the retina in human hereditary and acquired retinal disorders. It is a recording of the summed electrical activity of the retina in response to light.  Rod or cone function can be evaluated independently by controlling the stimulus and recording conditions. In mice the ERG is a sensitive measure for the functional assessment of the phenotype and of rescue in treated animals.

The ERG is used to characterize the retinal phenotype of mice expressing mutant genes.  This helps in determining which models may be suitable for treatment paradigms.

Electrophysiological and psychophysical tests are used to diagnose and follow the course of progression of inherited and acquired retinal disorders. They help us understand and characterize the clinical physiology and phenotype of the different retinal degenerative diseases.