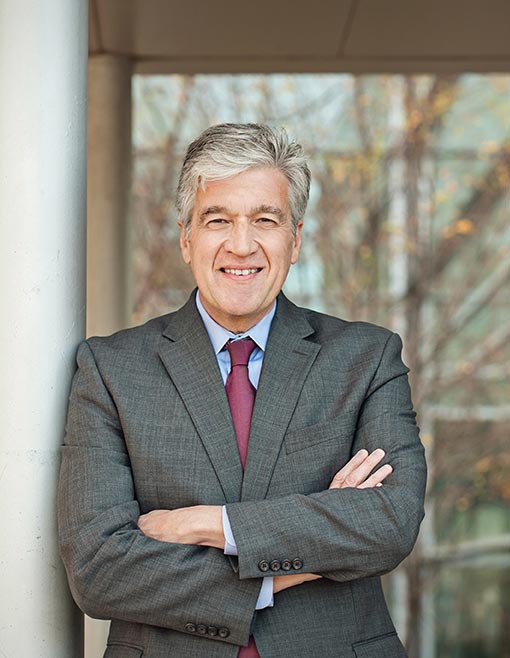 After graduating from the University of Chicago Pritzker School of Medicine, Dr. Adamis completed his residency in ophthalmology at Kellogg in 1989. “At Michigan, I was trained to ask how things work,” he told a Grand Rounds audience at Kellogg in October, “so I decided to try my hand at research.”

During his residency, Dr. Adamis was intrigued by the fact that abnormal growth of leaky retinal blood vessels was a major cause of macular degeneration and diabetic retinopathy, two common blinding eye diseases. Scientists had suggested that these leaky vessels were a failed response to a deficient oxygen supply to the retina.

At the same time, he was aware that in the late 1960s, Judah Folkman, M.D., a pediatric surgeon at Harvard University, had shown that experimental tumors in the anterior chamber of rabbits would grow only if they were nourished by blood vessels. Dr. Folkman had suggested that growing tumors produced a tumor angiogenesis factor that attracted these blood vessels. Very few scientists believed him. But in 1989, Napoleone Ferrara, M.D., and colleagues at Genentech discovered a protein that caused blood vessel growth; they called it vascular endothelial growth factor (VEGF). Soon afterward, Dr. Ferrara’s laboratory generated an antibody to VEGF.

Shortly after the discovery of VEGF and its antibody, Dr. Adamis accepted a fellowship in corneal diseases at Harvard and entered Dr. Folkman’s  laboratory. He wondered if the oxygen-deprived retinal cells in macular degeneration and diabetic retinopathy would produce high amounts of VEGF. Sure enough, he found that they did. Would blocking VEGF stop that vessel growth?

He placed a cold call to Dr. Ferrara, who agreed to ship the VEGF antibody to Boston. Dr. Adamis and his colleagues then inserted the antibody into monkey eyes; new blood vessels did not grow. The same effect occurred in humans. More experiments confirmed that VEGF created new ocular blood vessels and anti-VEGF agents stopped them from leaking in humans.

These experiments laid the foundation for FDA approval of several anti-VEGF medications now widely used in intravitreal injections for wet macular degeneration, diabetic retinopathy and retinal vein occlusion. Adamis explains that anti-VEGF treatment of patients in underserved regions is much less successful because patients do not arrive soon enough to benefit from the medication.

Can telemedicine identify them earlier? Dr. Adamis and his colleagues are looking at “machine learning” to interpret features that predict who needs treatment and how often. He is also seeking a way to get the medication into the eye without repeated injections. Under his direction, scientists are conducting a trial of a refillable implant that can be safely placed in the eye to slowly deliver the medication.

As vice president and global head of ophthalmology, immunology and infectious diseases at Genentech/Roche, which has a research budget of more than $10 billion, Dr. Adamis is in good position to face such challenges. Looking back at the start of his ophthalmic career, he credited U-M and Kellogg with “providing me with the kind of guidance and support that a very junior scientist can only wish for.”