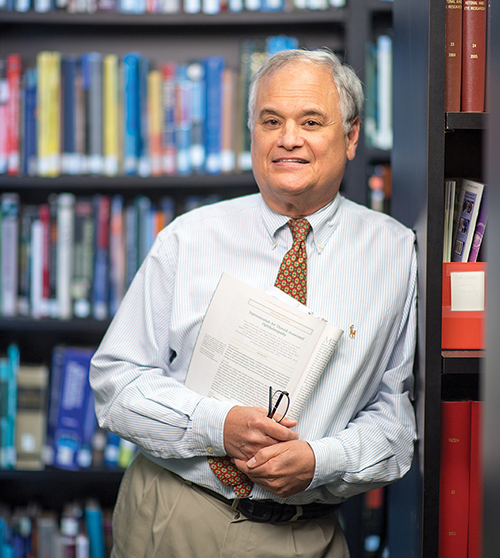 The work of Kellogg professor Terry Smith, M.D., has led to a successful multicenter clinical trial of a novel medication that benefits patients with Graves’ disease. The results of the trial were published in The New England Journal of Medicine in May 2017.

Physicians have long searched for a more effective remedy for the threat to vision and other manifestations of Graves’ disease, an autoimmune disorder that leads to overactivity of the thyroid gland. It causes enlarged eye muscles, protruding eyes, double vision and damage to the optic nerve, potentially leading to blindness. Traditional treatment with corticosteroids has limited efficacy and many side effects. Removal of orbital bones to allow more room for the enlarged muscles is an alternative, but it demands surgical skill and can cause complications even under the best of circumstances.

Dr. Smith has been interested in the causes and treatment of Graves’ disease since his days in medical school at the University of Missouri. His research at UCLA and Kellogg disclosed that a protein called insulin-like growth factor receptor (IGF1R) is intimately involved in the ophthalmic manifestations. Teprotumumab, a monoclonal antibody, binds to IGF1R and inhibits its activity.

On the basis of his research, Smith, an endocrinologist, was named the lead investigator in a multicenter trial of teprotumumab. He recruited his longtime colleague Raymond Douglas, M.D., Ph.D., a former Kellogg professor, to help him design the trial.

In the placebo-controlled trial, in which Kellogg was one of 15 participating international sites, 69 percent of the patients treated with teprotumumab improved and many showed therapeutic effects after only six weeks. These results are dramatically better than those with any other previously used medications and equivalent to the very best surgical outcomes.

On the basis of this trial, the Food and Drug Administration has designated teprotumumab as a “breakthrough drug.” A confirmatory trial is underway.

“This drug appears to be resetting the immune system,” Dr. Smith says. He anticipates similar benefits in other autoimmune diseases, such as rheumatoid arthritis and Crohn’s disease.