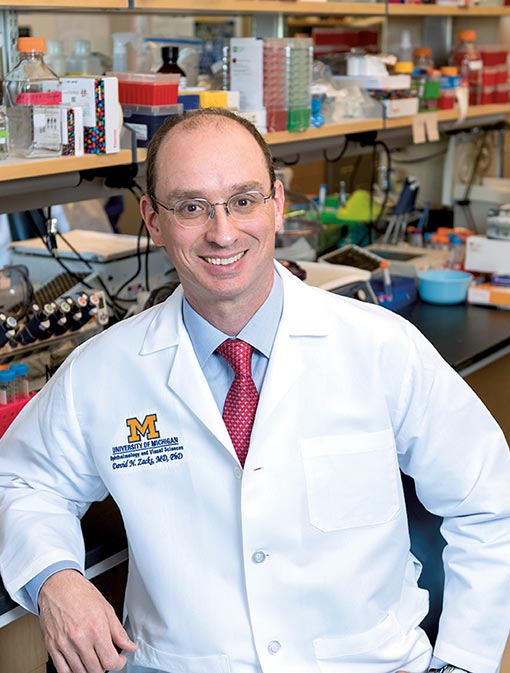 David Zacks, M.D., Ph.D., is converting an idea that emerged from his research laboratory into a therapy that he hopes will improve vision.

He has studied why photoreceptors die in retinal detachment. If there is a delay in surgical treatment, the detachment may extend into the macula. Once that happens, even the most expert surgery often does not restore fine vision. Because patients live far from hospitals, or do not notice vision loss until it is severe, they may not arrive in time. Dr. Zacks asks, “Is there anything we can do in these cases to keep the central retina alive?”

Ten years ago, he was experimenting in his laboratory with a peptide inhibitor called Met12. It affects Fas receptors, which induce apoptosis, a molecular cascade that leads to cell death. Met12 had previously been tried unsuccessfully as a therapy for liver toxicity, but Dr. Zacks found that it prevented apoptosis in the retina of experimental animals. He wondered if it could be used in humans.

Thus began the laborious process of turning a chemical reagent into a therapy. With the help of the U-M Office of Technology Transfer, the unit  responsible for commercialization of research, Dr. Zacks tried to interest pharmaceutical companies in his idea. But they were not yet ready to take it on.

So he turned to outside scientists, and together they founded ONL Therapeutics. The U-M and Harvard University’s Massachusetts Eye and Ear Infirmary—where Dr. Zacks began his research—co-own the patents on the technology. ONL Therapeutics has since developed a potent derivative of Met12 that is more suitable for intravitreal injection.

Dr. Zack’s work attracted Novartis as an equity shareholder and will help get ONL Therapeutics to the point of obtaining investigational new drug approval from the Food and Drug Administration.

Once that is achieved, ONL will launch clinical trials. If the Phase I safety trial is successful, the investigators will move on to Phase II and Phase III trials to determine if the drug is effective in keeping retinal cells alive before reattachment surgery.

“We hope to extend the window of opportunity to treat patients and improve vision,” Dr. Zacks says.