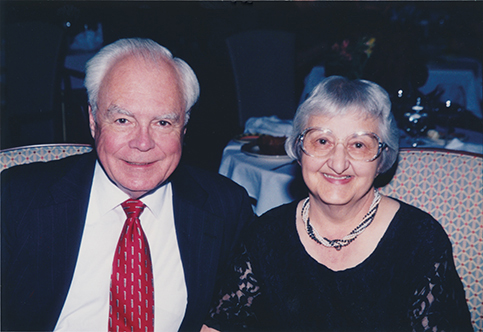 When retired executive Donald Sherman asked Richard Garfinkel, M.D., his retina specialist in the Washington area, how he could support age-related macular degeneration (AMD) research, neither knew they shared a history at the University of Michigan.

“He told me that the Kellogg Eye Center is doing great work and suggested I learn more,” Sherman says. “As we discussed it, he found out that I was a U-M graduate, and I found that he was, too.”

Sherman earned bachelor’s and master’s degrees in business administration at U-M and was a member of the marching band. Dr. Garfinkel completed his bachelor’s degree at U-M and his ophthalmology residency at Kellogg in 1987.

Once the Michigan connection was made, Garfinkel invited Sherman to attend Kellogg’s annual alumni ophthalmology reunion. Sherman and his daughter toured Kellogg with Dr. Garfinkel as guide. “Things are happening  pretty fast in macular degeneration,” Sherman says. “The faculty talked about what hopes they have for improving treatments.”

Those hopes match his. Diagnosed in 2000 with AMD, Donald Sherman has lost most of his central  vision. It has limited his ability to drive and travel, and he needs magnifying equipment to read.

A certified public accountant who retired in 1992 as chief financial officer at Champion, a sports apparel company, he recognized the tax advantages of donating part of his estate to charity, especially from tax-deferred funds. So he asked Dr. Garfinkel for a recommendation.

“I believe in the work being done at Kellogg,” Dr. Garfinkel says. “The faculty and staff are dedicated to advancing science and clinical therapies, and as an alumnus, I am glad to be a partner in those efforts.”

Sherman has set up a planned gift to establish the Donald R. Sherman AMD Research Fund at Kellogg. He also made arrangements to create the Laura M. Sherman Alzheimer’s Research Fund at U-M. While on campus, he and his daughter had visited the Michigan Alzheimer’s Disease Center. Laura Sherman, Mr. Sherman’s wife of 62 years, suffered with Alzheimer’s disease for many years and died in June 2016. Both endowed funds will support research in perpetuity.

“Losing one’s eyesight makes life difficult,” he says. “Alzheimer’s disease destroys the brain. My gift  isn’t going to come close to curing those diseases, but if it goes together with others to make a difference, that would be wonderful.” To learn more, please call the Kellogg Eye Center development office at (734) 763-0875.