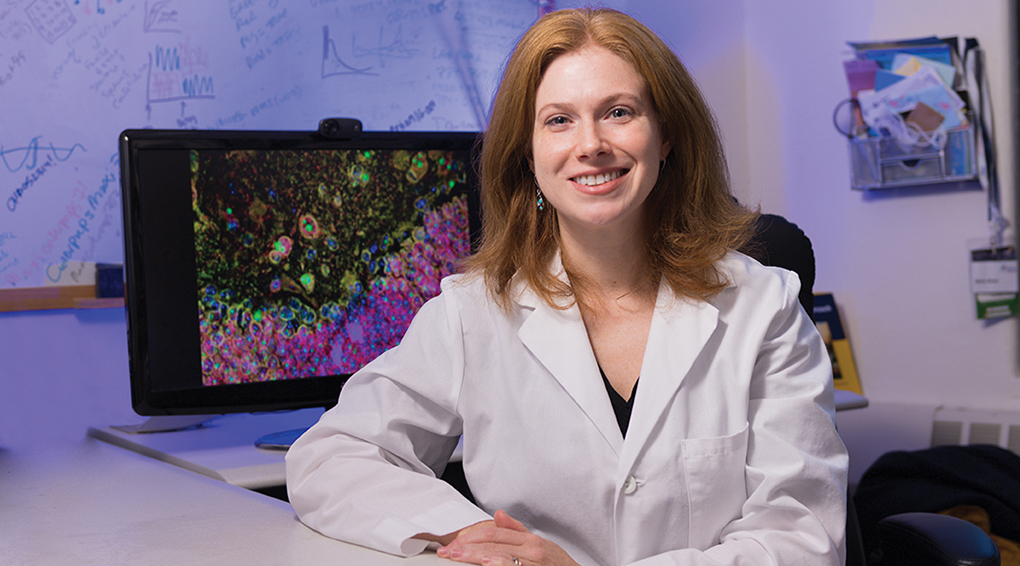 Sara Aton, M.D., is a U-M assistant professor of molecular, cellular and developmental biology who is doing groundbreaking research on amblyopia. Her investigation is considered so promising that she was awarded a $100,000 grant from  research to Prevent Blindness. The funding comes from the Walt Disney family.

She earned a Ph.D. from Washington University in St. Louis, where she studied how the brain regulates the mammalian “biological clock.” She discovered that a neuropeptide called vasoactive intestinal polypeptide was responsible for maintaining  harmony among the cells of the suprachiasmatic nucleus, leading to coordinated daily rhythms in behavior.

During post-doctoral research at the University of Pennsylvania, she began investigating the effects of sleep on the visual cortex. She used an experimental model of amblyopia developed decades ago. After the vision in one eye is blocked, and is  later unblocked, that eye does not see properly. Neurons in the binocular zone of the visual cortex no longer respond to stimulation of the formerly occluded eye. This model mimics the process in young children who have amblyopia, or persistently reduced vision in a crossed eye, an eye with a large uncorrected refractive error, or an eye with congenital ptosis or cataract.

Dr. Aton has extended her studies at U-M, finding beneficial effects of sleep in promoting sight. The Disney-family funded award will allow her to build on her work.

She describes her research as “exciting but laborintensive.” From it, she hopes to provide insights into the amblyopic process and evidence to decide whether “taking a well-timed nap and patching the nonamblyopic eye is helpful in restoring  sight.”