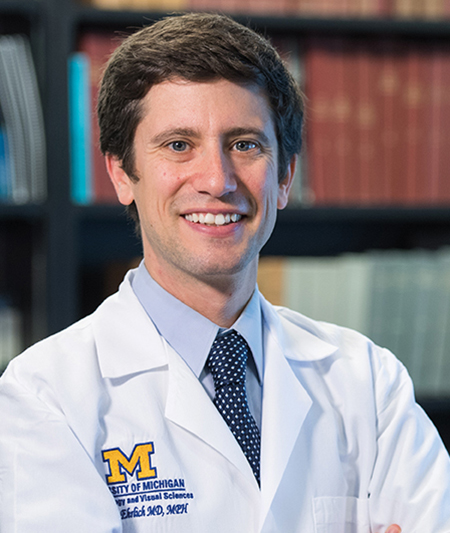 Dr. Ehrlich, whose specialty is glaucoma, has a K23 award, among only 29 currently awarded in the United States. The K23 award is designated for scientists committed to patient-oriented research. Ehrlich will apply his award to vision rehabilitation.

Dr. Ehrlich is developing a survey to measure patient reported outcomes, using a mixed-methods approach that relies on qualitative and quantitative research techniques. With this approach, he hopes to produce a valid and reliable tool.

“There is very little evidence right now on which rehabilitation strategies work,” he says.

Subjecting therapies to more rigorous testing is important to correct disparities in patient care. For instance, in most cases Medicare and private insurers do not pay for low-vision devices. Dr. Ehrlich anticipates that stronger scientific evidence will help improve access to high-quality low-vision care by proving to payers the value of such devices. 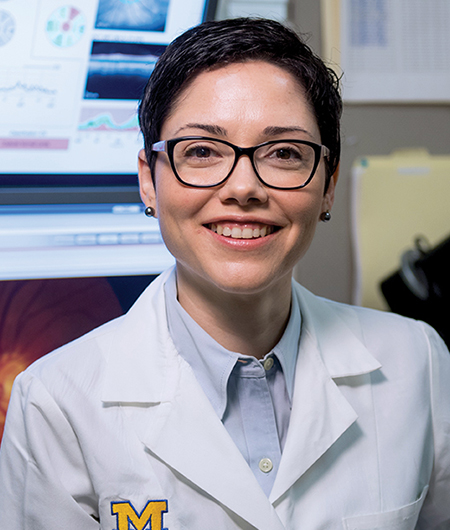 Dr. De Lott, whose specialty is neuro-ophthalmology, will draw on a K12 grant awarded to Kellogg for distribution to physicians with meritorious projects. She will study decision-making by physicians.

“We spend a lot of money on clinical trials and determine a lot of evidence,” De Lott says, “but the evidence doesn’t always get translated into use.”

Her research will attempt to find out why doctors sometimes ignore scientific findings in their day-to-day practice. She is focusing on optic neuritis, for which a study in the 1990s determined that routine steroid treatment was not effective. Yet any physicians continue to prescribe steroids. “We want to find out the factors in those decisions—both with doctors and patients,” she says.

In piloting an interview guide, she found that when referring patients with optic neuritis to experts, emergency department doctors often tell them to expect steroid treatment. “Patient expectations can affect physician behavior,” she says.

Dr. De Lott hopes that her research will allow her to team with U-M colleagues in neurology and health behavior to build a definitive survey for nationwide research into physician practices. 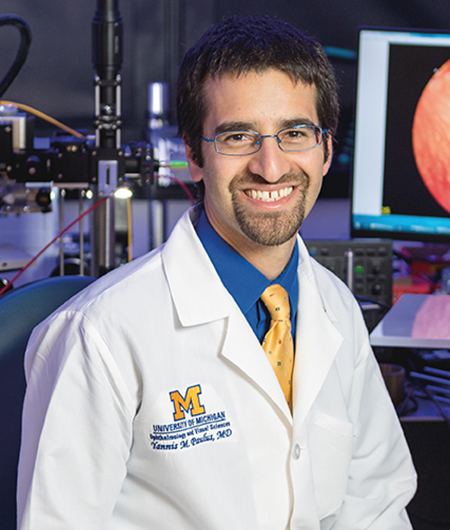 Dr. Paulus, a retinal specialist, also has K12 funding. With his joint appointment in biomedical engineering, his goal is to improve molecular imaging of retinal diseases.

He is studying photoacoustic microscopy, in which a nanosecond laser light is absorbed by tissue that then emits ultrasound waves to create high-resolution images of the retina and choroid. The advantages of this noninvasive procedure are early disease detection and improved monitoring of treatment.

“Visual outcomes in macular degeneration are correlated with early detection,” Dr. Paulus explains. “Without treatment, there can be significant visual loss.”

He anticipates that in macular degeneration, laser-activated chemical treatment may become “the new wave of precision medicine.” The idea is that molecular changes will show disease before the appearance of usual symptoms such as bleeding and swelling, which indicate anatomic changes. Dr. Paulus expects that better imaging will improve “how we follow patients with dry macular degeneration.”

To extend his research in photoacoustic microscopy, he has applied for a K08 grant, designed for basic science and to help a young scientist transition to independent laboratory research.