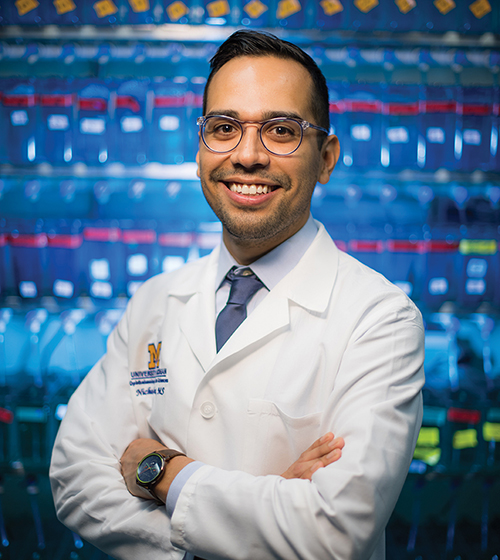 Nicholas Silva is a Ph.D. candidate in the laboratory of Kellogg professor Peter Hitchcock, Ph.D. He earned a master’s degree in biology and animal behavior from San Francisco State University. He arrived at U-M in 2012 and eventually selected Dr. Hitchcock as his mentor.

To test the role of inflammation in retinal neuronal regeneration, and the role of MMP-9, Silva produces zebrafish with genetically altered nonfunctional MMP-9 and injures them with excessive light. He measures their cytokine levels as an  expression of inflammation.Silva is using zebrafish to investigate the role of matrix metalloproteinase-9 (MMP-9), an enzyme produced in high levels when the central nervous system has been injured. Zebrafish are choice experimental animals because their retinas  regenerate briskly after injury. Scientists are realizing that inflammation is critical to this regeneration, and MMP-9 may be an important regulator of inflammation. Produced by damaged Müller cells, MMP-9 seems to act as a brake on  inflammation. Tissues that have mutant MMP-9 regenerate excessively after injury and eventually die.

Where does this work lead? Silva points out that regeneration of retinal neurons is not limited to  zebrafish, having been recently demonstrated in mice as well. Noting that mutant MMP-9 has been recently identified in human wet age-related  macular degeneration, in which excessive vascular and fibrous  proliferation contribute to blindness, he sees a direct relevance of his work to human disease. 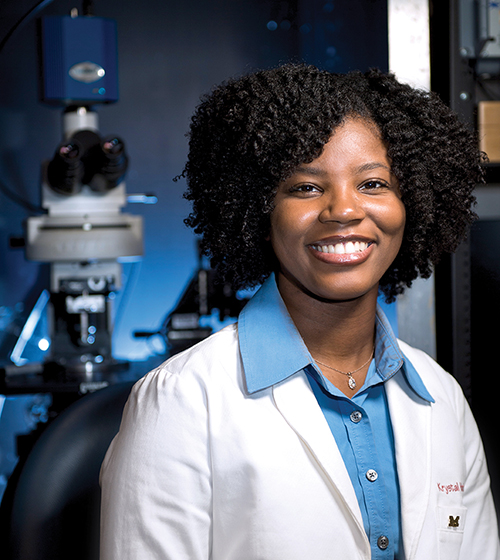 Krystal Harrison is a Ph.D. candidate in the laboratory of Kellogg Professor Kwoon Wong, Ph.D. Her work focuses the ability of intrinsically photosensitive retinal ganglion cells (ipRGCs) to contribute to visual perception.

While ipRGCs govern pupil constriction to light and synchronization of sleep-wake cycles to night-day cycles, they also function in pattern recognition. Because ipRGCs remain light-sensitive in many blind patients suffering rod and cone  regeneration, a better understanding of the signaling of ipRGCs could lead to novel strategies to restore sight in such patients.

Harrison was awarded a coveted Rackham Merit Scholarship to join the Ph.D. program of the U-M Department of Molecular, Cellular and Developmental Biology. 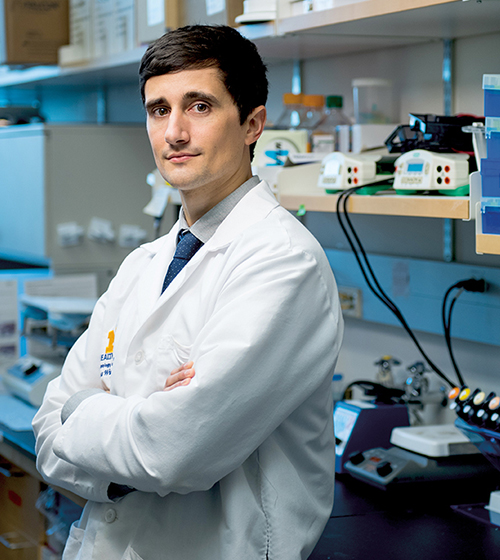 Thomas Wubben, M.D., Ph.D., a fellow in vitreoretinal diseases, is interested in what “stresses” retinal photoreceptors when the retina detaches and why the cells often die. He hopes his research will interrupt that process. He is examining the energy production pathway known as glycolysis in these essential photoreceptor cells, which require large amounts of energy to keep up with the retina’s demands for constant visual activity throughout the day.

In his work, Dr. Wubben uses a model of retinal detachment to determine how reprogramming glycolysis through specific proteins can improve the survival of stressed photoreceptor cells. He hopes that creating novel therapeutic agents will help  increase photoreceptor survival and preserve vision.

Wubben came to Kellogg as an ophthalmology resident. He has worked with his mentor, Kellogg professor Cagri Besirli, M.D., Ph.D., since then. Having completed a Ph.D. in drug discovery and design and in enzymology at the University of Illinois  at Chicago, he was well prepared.

He has already received the Vitreo-Retinal Surgery Foundation Research Award and the Michigan Ophthalmology Trainee Career Development Award. He is a two-time recipient of Kellogg’s Slocum Resident Research Award and a fellow in the  prestigious Society of Heed Fellows.

Dr. Wubben plans to pursue a career in academic medicine as a clinician-scientist with a basic science laboratory.