The Kellogg Eye Center inaugurated three professorships this year—two established by longtime patients and one by a  faculty member of more than 60 years. Each will support faculty, providing time for research, educational and leadership activities in perpetuity.  “We are very grateful to these individuals, whose generosity and foresight will forever benefit faculty and patients,” says Paul P. Lee, M.D., J.D., F. Bruce Fralick Professor and chair of the Department of Ophthalmology and Visual Sciences. “And we were pleased to be able to recognize and support outstanding faculty members who are making significant contributions to  the field.”

Dr. Antonetti is scientific director at Kellogg and one of the world’s leading experts in the blood-retinal barrier. He is part of a team advancing approaches to protect and restore the barrier during disease processes so vision can be saved and restored.

Roger W. Kittendorf, an attorney and businessman in  Genesee County, Michigan, died in 2012. Mr. Kittendorf was a long-time Kellogg supporter; he made generous gifts to vision research and ophthalmic education, and Kellogg’s Resident  Education Center is named in his honor. The professorship  was created through a bequest.

Mr. Kittendorf often said he felt privileged to share his  success with others.

“He would have been awed by David Antonetti’s approach to science and his passion for pushing the envelope to benefit patients,” says Paul R. Lichter, M.D., M.S., an active emeritus  professor and immediate past chair of the Department of Ophthalmology and Visual Sciences. “He would have been very moved to know that he was playing such a significant role in ensuring such work will continue at the University of Michigan for generations to come.” 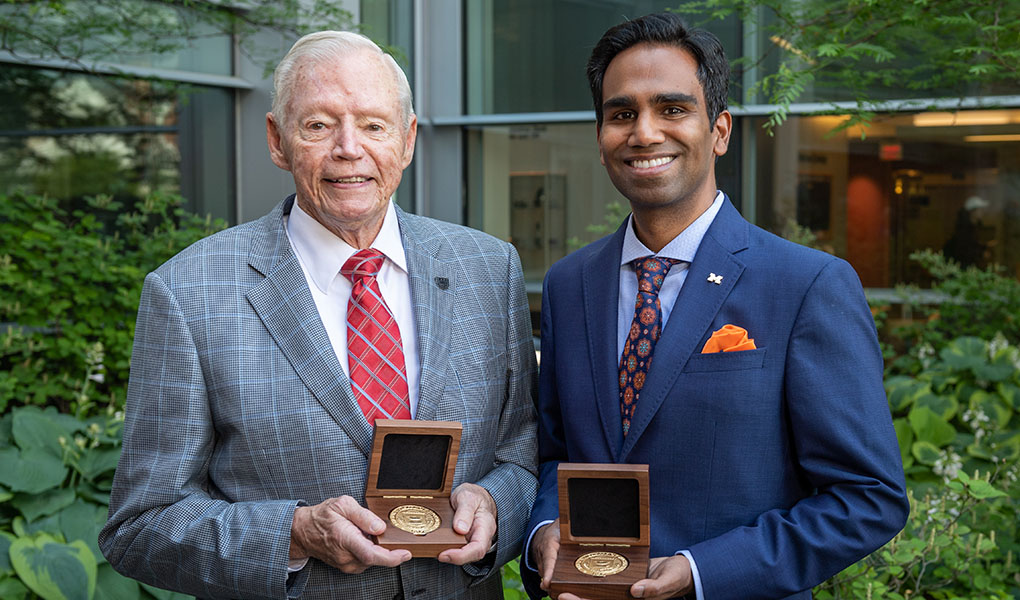 When Rajesh C. Rao, M.D., became the first Leonard G. Miller Professor in Ophthalmology and Visual Sciences on June 11, he described it as a transformative opportunity.

“The Kellogg Eye Center and the University of Michigan have to be one of the most inspiring places in the country for a clinician-scientist to pursue dreams,” he says. “It is a privilege to collaborate with colleagues inside and outside our department.”

Dr. Rao studies the role of epigenetics in retinal development, which includes the chemical modifications on DNA and DNA-associated proteins that regulate gene activity. His aim  is to advance treatments for blinding diseases. His team has made major contributions to the field, including linking the dysfunction of certain epigenetic proteins to blinding human diseases for the first time.

Ms. Iacobucci, affectionately known as “Miss Ida,”  was a clinical associate professor of ophthalmology and visual sciences, for nearly 30 years and one of the country’s leading specialists in orthoptics, which is the treatment of disorders  of vision, eye movements and eye alignment. She began her career at U-M in 1957, developing new treatment methods  and authoring two textbooks.

She trained more than 300 ophthalmology residents and orthoptics students in the clinic at Kellogg that now bears her name: the Ida Lucy Iacobucci Orthoptics Clinic. Before she died in 2017 at age 85, she arranged for the professorship to  be established through her estate.

Dr. Archer, a pediatric ophthalmologist and dedicated  researcher and educator, worked alongside Ms. Iacobucci for nearly 30 years. His wide-ranging clinical research interests  include vision screening for preschoolers, the management of eye-muscle paralysis, improving surgical interventions and more. About a third of his patients are adults with a misalignment of the eyes, and he has ongoing projects looking at the causes and treatment of double vision in adults. He also helped develop a standout fellowship program to train pediatric  ophthalmologists.

Before she died, Ms. Iacobucci said it was her sincerest  wish that Dr. Archer be the first to hold the professorship in her name.