In people born with nanophthalmos, the eyes are small, but the eye structures—including the size of the lens—are otherwise normal. A normal-sized lens in a small eyeball can cause a host of vision-related problems, including severe hyperopia (farsightedness), amblyopia (lazy eye) or strabismus (crossed eyes) in children, retinal detachments, and glaucoma. Nanophthalmos also makes ocular procedures like cataract surgery riskier.

A Kellogg team led by ophthalmologist and geneticist Lev Prasov, M.D., Ph.D., is the first to link nanophthalmos with a mutation in the myelin regulatory factor (MYRF) gene that causes it to produce an abnormal protein. They also established an interaction between MYRF and TMEM98, another gene implicated in nanophthalmos, describing a new pathway for eye growth and development. 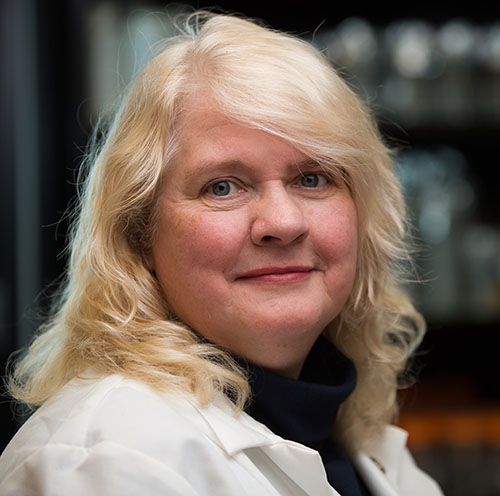 The findings, published in the journal PLOS Genetics, build on the work of Kellogg professor emerita Julia Richards, Ph.D., who led the team that, after identifying one large family with numerous occurrences of nanophthalmos, first linked the origins of the condition to a specific area in the genome called the NN01 locus.

“There are numerous steps in making a gene-disease connection,” says Dr. Prasov. “One is to confirm that whatever mutation you suspect is not unique to members of one bloodline. For our study, we augmented the information from NN01 with that of unrelated nanophthalmos patients to ensure we started with a comprehensive sample.”

The team then sequenced numerous genes within the same region, looking for mutations or “misspellings” that might be driving the development of the disease. “During that process, MYRF rose to the top of the list of compelling misspellings,” Dr. Prasov explains.

During the genetic sequencing process, another important link was established. “We found that MYRF regulates the expression of the gene TMEM98, previously implicated in nanophthalmos,” Dr. Richards says. “In mouse models without MYRF, we saw a sharp decline in the expression of TMEM98, further evidence that a MYRF/TMEM98 interaction causes nanophthalmos.”

The finding points to a brighter future for children born with nanophthalmos. “We know that the eye continues to grow after birth,” says Dr. Prasov, “so there are opportunities to intervene early with genetic counseling and screening for nanophthalmos and to prescribe glasses. Eventually we hope to develop genetically targeted treatments as well.”

Dr. Prasov also sees the potential of this discovery to address a much more common problem. “While nanophthalmos results in an underdeveloped eye, myopia, or nearsightedness, occurs when the eye grows too much,” he explains. Myopia impacts 30 to 40 percent of adults in the U.S. and Europe and up to 80 percent of adults in Asia. “It’s exciting to imagine how this new knowledge about eye development may open a door to new interventions to address a major worldwide public health issue.”

In 2019, Dr. Prasov received the ARVO/Alcon Early Career Clinician Scientist Award for his studies of the genetic basis of developmental ocular disorders. He continues his focus on the genetic mechanisms of nanophthalmos as an assistant professor of ophthalmology and visual sciences and of human genetics and a scholar in the Michigan Vision Clinician-Scientist Development Program. His work is supported in part by grants from the Knights Templar Eye Foundation.