"Sight is a gift, and I will be forever grateful to the team at Kellogg for saving mine. My daughter was involved in cheerleading, sports, and music in shcool. Thanks to my Kellogg doctors, I never missed an event." - Todd Osment 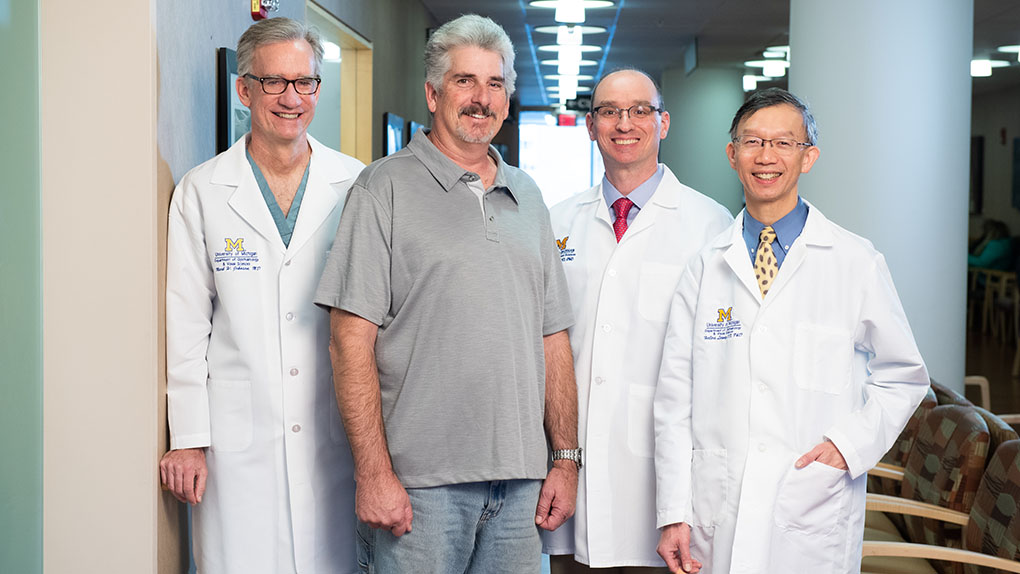 Sometimes, life throws a curve ball. Strangely, many of the curve balls in Todd Osment’s life have hit him in the left eye.

“I was nine years old the first time the eye was injured,” says Osment, now 56. “A classmate shot a pencil at me with a rubber band.” That was also the first time Osment made the 45-mile trip from his home in Monroe, Michigan, to the Kellogg Eye Center where a surgeon was able to save the eye, but not its vision. This is the story of how, 47 years later, he is able to see in that eye.

After his injury Osment would rely solely on his right eye for the next 20 years. As he got older, he became more aware of images in his left eye and—after surgery to implant an intraocular lens—he saw slightly better.

In 2012, Osment would suffer yet another injury to his left eye. While clearing tree branches in his yard after a storm, a branch struck Osment under the safety glasses he was wearing, rupturing his left globe.

Doctors at the hospital near his home in Adrian, Michigan, determined that the injury was too severe to be managed there. Arrangements were made for a Kellogg surgical team to perform an emergency procedure to reconstruct the globe. After his eye healed, Maria Woodward, M.D., M.S., a corneal specialist who has helped care for Osment at Kellogg, performed a cornea transplant.

For the first time since childhood, Osment had reliable vision in his left eye. Yet another curve ball was coming. In 2014, he began to experience redness and pain in the eye. Due to his multiple traumas and the development of glaucoma, “it appeared that the corneal transplant was slowly rejecting,” says Kellogg glaucoma specialist Paula Anne Newman-Casey, M.D., M.S., who, along with Joshua Stein, M.D., M.S., was treating his glaucoma.

Despite an aggressive regimen of both steroid drops and oral steroids, the team was unable to rescue the graft. A second transplant was performed by cornea specialist Roni Shtein, M.D., M.S.

“Both Mr. Osment’s transplant and a follow-up procedure to remove residual membranes were very successful,” Dr. Shtein says. “He healed well, and we were able to refer him for a special contact lens to further improve his vision.”

In fall 2017, Osment developed a serious infection inside the eye called endophthalmitis and was evaluated by Kellogg's retina service. “Endophthalmitis is a painful condition that compromises vision and can cost a patient both sight and the eye if not treated promptly,” says retinal specialist Thérèse Sassalos, M.D.

Sassalos and colleagues Mark Johnson, M.D., and David Zacks, M.D., Ph.D., monitored Osment every day until the infection was resolved. They used ultrasound to examine the inflammation in the back of the eye, and performed retinal injections to remove fluid for analysis and administer antibiotics.

Today, Todd Osment enjoys excellent health and vision in both eyes. He credits his Kellogg physicians, but they credit him. “Through each challenge, he remained engaged in his care, which is impressive,” says Dr. Woodward.

“At every step he was diligent, asked great questions, and did everything we asked of him,” adds Dr. Sassalos. “It’s a privilege to care for someone so involved and so appreciative.”