“The ultimate goal is not only early diagnosis, but early, precision treatment.” - Yannis Paulus, M.D., F.A.C.S.,

Neovascular age-related macular degeneration, or wet macular degeneration, is characterized by the creation of new blood vessels in the choroid layer of the eye. If not treated early, the resulting swelling, fluid buildup and bleeding can result in significant and irreversible vision loss.

The No. 1 factor in predicting treatment outcomes for wet macular degeneration is the patient’s vision at the time of diagnosis, so early detection is vital. But current methods of imaging the retina only capture the effects of choroidal neovascularization already in progress.

The technology, photoacoustic microscopy, uses both light waves and sound waves to see activity at the molecular level. This concept is commonly used in tumor imaging, but until now its potential in ophthalmology has been largely unrealized.

The Paulus lab is one of a handful worldwide to apply photoacoustic microscopy to retinal imaging in animal models, and has pioneered its potential in large eyes such as human eyes. 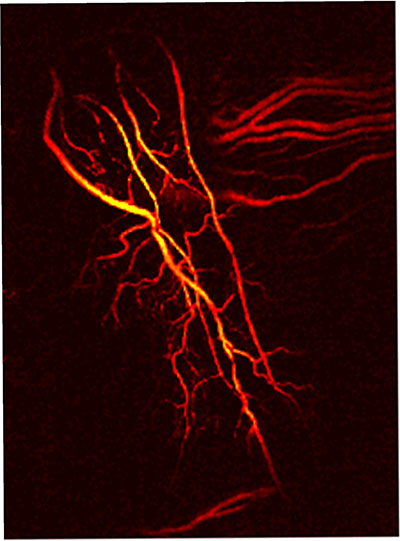 “The challenge with the technology has been that the farther away the machine’s detector is from the source—in this case, the retina—the weaker the sound waves it captures, and the poorer the resulting image,” says Dr. Paulus, assistant professor of ophthalmology and visual sciences and of biomedical engineering. This has limited its effectiveness for imaging larger eyes.

Dr. Paulus will use the grant to continue refining the technology. His team is experimenting with injecting light-activated therapeutic nanoparticles into the retina to slow or stop neovascularization without damaging cells.

“The ultimate goal is not only early diagnosis, but early, precision treatment,” he says.