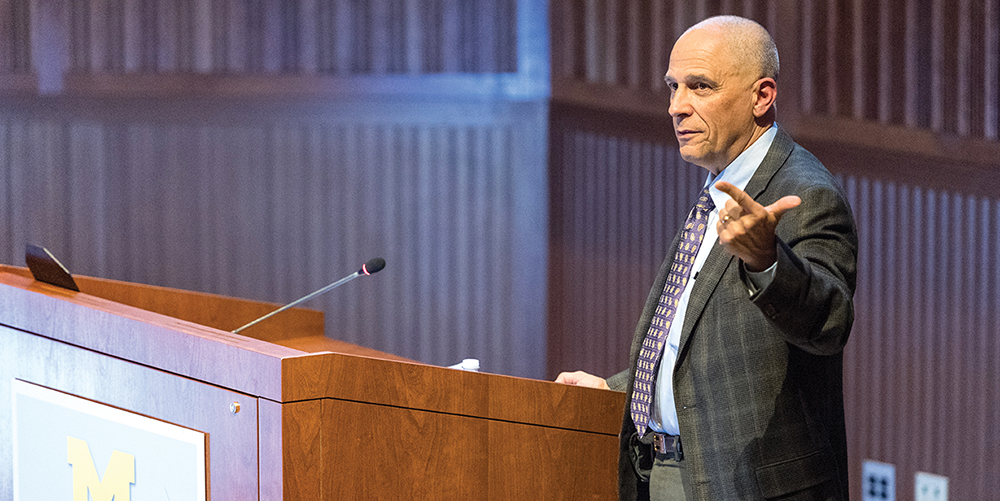 Dean Sienko, M.D., M.S., vice president for health programs at the Carter Center
This year’s International Night drew more than 100 U-M medical students as well as Kellogg ophthalmology residents, fellows, faculty and other members of our medical community for a program that highlighted Kellogg activities abroad. Dean Sienko, M.D., M.S., vice president for health programs at the Carter Center, delivered the keynote address.
The Carter Center was founded in 1982 by former President Jimmy Carter and his wife, Rosalyn, to address health problems  and conflicts around the world. Notably, the center targets neglected tropical diseases, mostly in Africa, Central America and South America. Onchocerciasis, or river blindness, and trachoma are the two tropical eye diseases that have  received the center’s attention.
Onchocerciasis is the second leading infectious cause of world blindness after trachoma. In his keynote, Dr. Sienko pointed out that more than 15 million people are infected and a million of those are blind.
Eradicating onchocerciasis has  been an enormous challenge; the center has organized repeated massive drug treatment campaigns using ivermectin. In 2016, the center treated 18 million people with ivermectin twice a year, and aims to increase that number to 30  million.
“We have now eradicated onchocerciasis from Central America,” Dr. Sienko reported.
Trachoma, the number one infectious cause of world blindness, is another major target for the Carter Center. More than 200 million people are infected with this disease, which is caused by the Chlamydia trachomatis organism and carried  by flies. The infection leaves the eyelids scarred, causing them to turn inward.
Dr. Sienko explained that trachoma is combated using “the SAFE method”: surgery, antibiotics, facial cleanliness and environmental improvement.
The Carter Center has supported more than 700,000 surgeries that reverse the direction of scarred eyelids so that they do not scrape the cornea and cause it to become cloudy—the cause of blindness in those with trachoma. In 2016, a trachoma operation occurred every five minutes somewhere in the world under Carter Center auspices.
More than 150 million doses of Chlamydia killing azithromycin have been distributed in infected villages. The center has trained more than 300,000 villagers in proper hygiene and installed nearly 4 million latrines.
Asked if the Carter Center encounters resistance from villagers, Dr. Sienko replied, “not at all. They welcome us. But we do not go in unless we are asked, and we are careful to lay the groundwork. Sadly, there are many countries where it is just too risky.”
At the end of his address, Dr. Sienko was surrounded by U-M medical students anxious to learn more. One student asked him why he chose this job.
“I told President Carter that in my current job as a public health officer in the United States, I can prevent disease in dozens of people,” he replied. “But at the Carter Center, I could do it for millions of people."