Uveal effusion can affect vision in some patients who receive immune checkpoint inhibitors. Although it is rare, knowledge of this risk is important both for the ophthalmologists who treat it and for the oncologists prescribing the anti-cancer treatment, say Michigan Medicine researchers.

The cases of three recent patients, published in a report in JAMA Ophthalmology, highlight the issue. 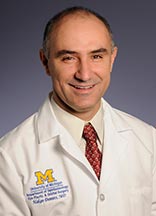 With certain inhibitor drugs, the anti-PD-1 (programmed cell death protein-1) and anti-PD-L1 (programmed cell death ligand-1) monoclonal antibody immune checkpoint inhibitors block the interaction between PD-1 receptors on T cells and their counterpart proteins, PD-L1. This blockage allows the T cells in the immune system to do their job: attack and kill the cancer tumor cells.

“In our three patients who had been receiving these immune checkpoint inhibitors, we noticed large uveal effusions. In addition, there was anterior chamber inflammation in two of our patients,” says Hakan Demirci, M.D., the Richard N. and Marilyn K. Witham Professor at the University of Michigan Kellogg Eye Center.

Says Merina Thomas, M.D., the senior vitreoretinal surgery fellow and a clinical lecturer at Kellogg: “[Effusions] happened quickly, between one and three months after the patients had received at least two infusions of the immune checkpoint inhibitors. That raised our suspicion.”

“But not all patients can stop the therapy, because they have widespread, life-threatening cancer,” adds Demirci.

In two of the three patients, six weeks to three months after stopping the medication, the uveal effusions had improved and the affected eye looked normal. The third patient with a uveal effusion continued with the immunotherapy for his melanoma, but he died four months later.

This article originally appear on the Michigan Health Lab blog. 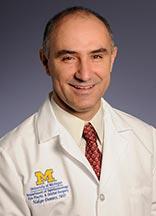