A fishing accident could have robbed a young boy of sight in his left eye. His vision was restored thanks to a donated cornea and transplant surgery. 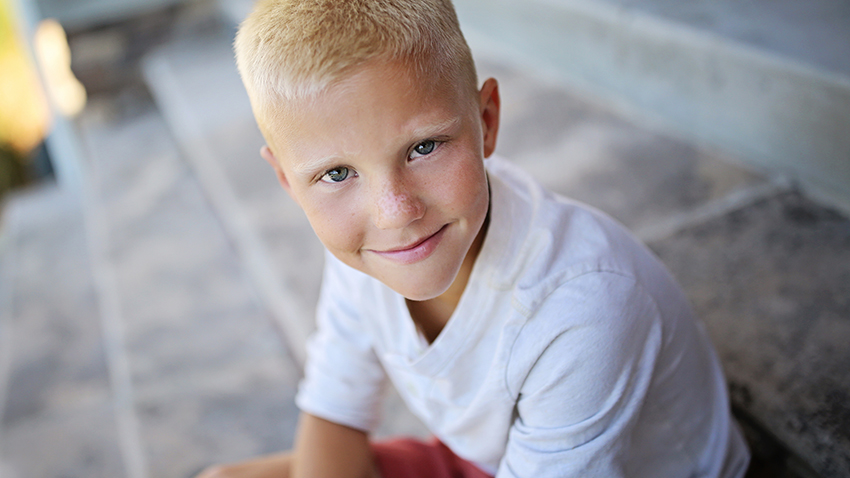 On a hot day in July 2017, Colton Thompson and his family set off for the pond on the family’s property. One of Colton’s brothers had saved up money for a shiny new fishing lure, and it was time to test it out.

A peaceful day quickly turned tragic: Colton, then 7 years old, knelt down to tie his shoe along the water’s edge, just as his brother drew back the fishing rod.

With the flick of a wrist, the lure caught Colton in his left eye, ripping straight through the middle.

Colton’s parents, Katelyn and Jacob, responded right away, rushing him to the hospital 40 minutes from their rural community outside Grand Rapids, Michigan.

Although the medical staff didn’t know how much damage the hook had caused, the family received good news that day. Rather than digging into the eye, the lure was embedded in Colton’s eyelid.

It was possible, doctors said, that the eye would heal on its own after emergency surgery to remove the lure. Colton went home with a pair of prescription glasses, and his sutures were taken out a few weeks later.

“We just assumed we were on our way to getting out of it,” his mother says.

Recovery wasn’t so simple. As a significant scar formed and grew in density, Colton’s vision regressed. He started squinting because of light sensitivity.

Eventually, he kept his left eye closed all the time because he had virtually no vision.

Children make up one-third of the 387,000 patients who go to the emergency department each year because of an eye injury. Most pediatric eye injuries are in young boys.

In recent years, however, emergency visits for acute ocular injuries in children appear to be declining.

Still, there are long-term financial and social consequences tied to vision loss in children. For Colton, there was real concern he’d permanently lose vision in his left eye.

Thanks to the generosity of a deceased donor, Colton received a sight-restoring cornea transplant using tissue provided by Eversight, one of the largest networks of eye banks in the United States.

Eversight prepared and delivered the tissue to University of Michigan Kellogg Eye Center surgeon Shahzad Mian, MD, a cornea specialist who cares for adults and children.

Mian removed 80 percent of Colton’s cornea and replaced it with a healthy donor cornea, a procedure called penetrating keratoplasty.

Today, six months after transplant surgery, Colton has nearly 20/20 vision and no signs of rejection of the donor cornea.

“Children are more prone to rejection than adults,” Mian says, noting that the risk goes down over time.

Katelyn, meanwhile, has a new perspective on her children’s ocular safety.

“Now, we always keep sunglasses and hats in our tackle box,” she says, adding that helmets and protective eyewear are mandatory during sports and recreation.

Despite his accident and its aftermath, Colton isn’t afraid to do any of the things he loves, such as swimming and riding four-wheelers with his cousins and playing football with his brothers.

And Colton thinks it’s pretty special that someone was kind enough to donate a cornea for him. He even wrote a letter to the donor’s family:

Thank you for donating a cornea for helping people see. I could not see because my brother cast a fish hook in my eye but now I can see better. I’m just saying thank you.

Katelyn added an extra note at the bottom to share everyone’s gratitude.

Thank you so much for your family’s generous gift. Our son’s future is so much brighter because of his restored vision!

This article originally appear on the Michigan Health blog