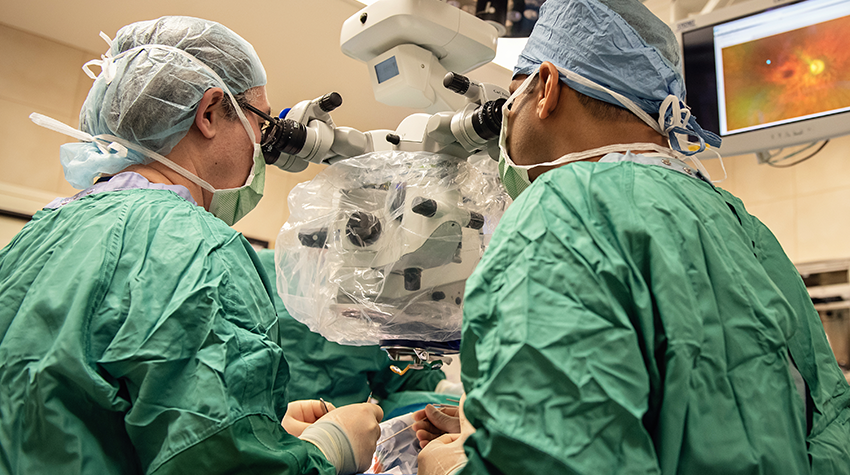 Eye troubles detected at infancy began to take their toll when Emma Kate Roden started walking. The toddler would often bump into things because of poor eyesight.

Now age 7, a rare genetic condition has continued to eat away at her vision. She can’t see after dark, so there are night lights in every room of her family’s Georgia home. At school, Emma Kate is learning to read Braille.

Her parents had been told that she could be fully blind by her 20s unless a treatment became available.

With Emma Kate under the care of retina specialists at the University of Michigan Kellogg Eye Center, that treatment finally arrived.

“We went through a lot to get here,” says Katie Roden, Emma Kate’s mother, who sat with her husband, Chris, and family in the lobby of U-M’s C.S. Mott Children’s Hospital, where the high-profile procedure took place on Jan. 24.

Kellogg Eye Center has begun treating patients with a new gene therapy for children and adults with inherited forms of vision loss.

The therapy is called Luxturna, and the Rodens anxiously followed its promising clinical trial results and finally approval by the U.S. Food and Drug Administration  in late 2017 as the first therapy available to treat a genetic disorder.

“Ultimately, we want these therapies to be available for our youngest patients,” says Cagri Besirli, M.D., Ph.D., Emma Kate’s doctor, a Kellogg ophthalmologist who specializes in retinal illnesses of children. “The sooner they receive treatment, the less vision loss they may have to endure.”

The treatment, first delivered into Emma Kate’s left eye, contained a synthetic copy of a gene that’s important for vision — and one that doesn’t work correctly for her. Her right eye was treated one week later.

Each time, doctors led a nearly two-hour procedure that involved using a hair-thin needle to inject the drug directly under the retina.

It’s a one-time treatment for patients such as Emma Kate who have mutations in both copies of the RPE65 gene, which is responsible for producing a protein that makes light receptors work in the eye.

About 1,000 people in the United States have inherited retinal diseases related to this gene. People with RPE65 mutations can begin to experience losses of vision in their infancy, including the loss of peripheral vision and night vision.

Luxturna was designed to improve a recipient’s functional vision — and, in the best cases, prevent blindness.

Beyond Emma Kate’s procedure, the same gene therapy was recently performed by Kellogg on a 6-year-old from Michigan.

“The treatment is not exclusive to children, but chances are they are more likely to have sufficient viable retinal cells,” Kellogg genetic counselor Kari Branham, M.S., says of the progressive damage done by retinal dystrophy.

The gene therapy treatment uses a benign virus to deliver healthy copies of the gene, an efficient way to deliver replacement genes to the retina.

But gene therapy is anything but simple. And it takes an extraordinary team effort to get treatments to patients who need them. Only 10 centers in the United States offer Luxturna, a product developed by Spark Therapeutics.

Kellogg is one of the few centers with the multidisciplinary expertise in diagnosis, genetic testing and treatment to offer the new generation of gene therapy and host clinical trials for other conditions.

Thiran Jayasundera, M.D., a Kellogg retina surgeon on the team that performed the first implants of the Argus® II Retinal Prosthesis System (Argus II) called the “bionic eye,” when it came on the market in 2014, is a principal investigator on research leading to clinical trials, called natural history studies.

“These studies collect and analyze patient information to draw a clearer picture of how these eye disorders develop and progress,” he says.

Results from those studies could help determine which conditions are candidates for gene therapy treatment. A long list of retinal dystrophies, including retinitis pigmentosa, Stargardt disease, Leber congenital amaurosis, achromatopsia, X-linked retinoschisis, Usher syndrome and choroideremia, can be traced to inherited changes in DNA.

All of these conditions lead to progressive vision loss. Some end in total blindness.

Until recently, the wide-ranging disorders shared one thing in common: There were no available treatments for them.

“For so long, we’ve struggled to help patients facing these blinding illnesses,” says Besirli. “Gene therapy is still in its infancy, but there is reason for optimism. We have an FDA-approved treatment for one condition and numerous promising options for others.

“We have an outstanding retinal dystrophy team, and we have amazing patients. It’s a very exciting time.” 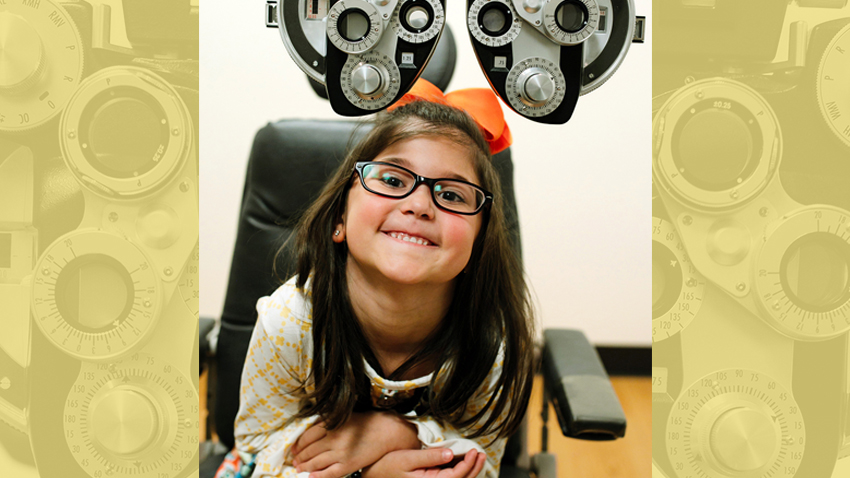 Until recently, doctors could do no more than make a tentative diagnosis and suggest visual aids for those with retinal dystrophies.

The Roden family was offered something more when they came to Kellogg as part of a series of visits to eye specialists. It was the first time they were offered genetic testing.

“On our first visit to Kellogg, Emma Kate was 2 years old, and we saw Dr. (John) Heckenlively,” Katie Roden recalls of meeting the now-emeritus retina specialist. “He looked in her eye, not even five seconds, and says: ‘She’s got Leber congenital amaurosis. We need to find out what kind of gene it is.’”

With many culprit genes having been identified in retinal diseases, Heckenlively knew things were changing. Diagnoses had become more definitive, and promising gene-replacement treatments were on the way.

When Luxturna became available, the Rodens were connected to a specialized retinal dystrophy team at Kellogg ready to help save Emma Kate’s vision.

In the days following her treatment, doctors monitored her vision and watched for any signs of infection and inflammation. Administering Luxturna requires retinal surgery, which is associated with risk for cataract and increased eye pressure.

For now, the surgeries are considered a success.

“This could open a brand-new world for her,” says Katie Roden. “Even if her vision isn’t like everyone else’s, I want her to be as independent as possible, and not hold back from doing anything she wants in life.”

This article originally appear on the Michigan Health Lab blog.