Acanthamoeba eye infections in contact lens wearers are rare but serious, and these infections often start because of improper lens handling and poor hygiene. 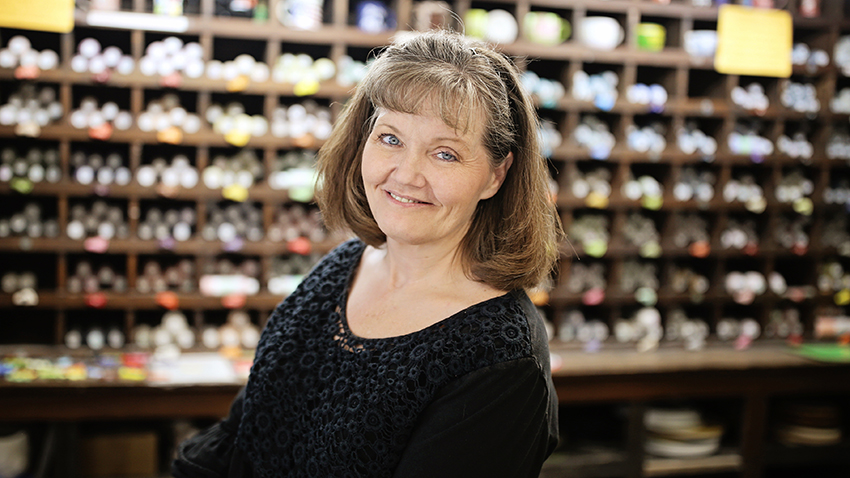 Traci Lawson was diagnosed with pinkeye, but two weeks later, her left eye was suddenly getting worse.

“My eye was milky looking and had gotten so swollen it was protruding from my face,” says Lawson, of Lansing, Mich., who describes the eye pain as if she was being “jabbed with a hot poker.” She was also sensitive to light.

After going to six doctors, she was referred to the University of Michigan Kellogg Eye Center where she was diagnosed with Acanthamoeba keratitis: a parasite.

“People who wear contact lenses are at increased risk for having an infection with acanthamoeba, but it’s usually with certain risk factors,” says Kellogg cornea specialist Shahzad Mian, M.D., professor of ophthalmology at Michigan Medicine.

Acanthamoeba eye infections in contact lens wearers are rare but serious, and these infections often start because of improper lens handling and poor hygiene.

Poor contact lens habits, such as washing lenses in tap water or showering while wearing contact lenses, can increase the risk.

If not treated promptly, acanthamoeba keratitis can cause permanent vision loss. In Lawson’s case, she would need a cornea transplant to restore her lost vision.

Bacteria all around us

Water can harbor bacteria and parasites and contact lenses can act like sponges and hold water. It makes contacts and swimming an unsafe combination.

The incidence of infection increases in summer months, most likely because water sports such as swimming and boating are more common then.

Acanthamoeba organisms are all around us, Mian says, commonly found in soil, dust, tap water, swimming pools and hot tubs.

But Acanthamoeba keratitis is often difficult for an eye doctor to diagnose because early on the symptoms are similar to pinkeye or a viral infection.

As it progresses, and the parasite take hold in the cornea, a ring-like ulceration of the corneal tissue may appear.

Diagnosis of keratitis often occurs once it is determined that the condition is resistant to antibiotics used to manage other infections. Imaging tests and culturing the cornea can also pinpoint the cause.

“The problem really is diagnosing it quickly and early on so that the proper treatment can be started,” Mian says.

It took months of treatment starting in September 2017 with specialized eye drops to kill the parasite. “I credit the treatment with saving my eye,” she says.

While infection-free, Lawson’s eyes were far from clear. The infection left her with hazy vision and significant scarring to her cornea, the clear domes in the front of the eye that contribute to focusing power.

In 2018, she underwent corneal transplants in both eyes. She continues to recover from a second transplant in the left eye in which the donated corneal tissue did not attach. She uses eye drops to reduce the risk of another rejection.

“She has a good prognosis for having long-term recovery of vision,” Mian says.

Contact lens wearers can avoid the severe infection by washing and drying their hands when they handle their contacts, storing contact lenses in clean solution daily rather than in water or old solution, and as much as possible, avoiding wearing lenses while swimming or bathing.

“The most important way to prevent getting infections associated with acanthamoeba are to have really good contact lens hygiene since it’s the number one risk factor for this infection,” Mian says.

“It’s difficult to treat so the best thing to do is to try to prevent it.”

This article originally appear on the Michigan Health blog.