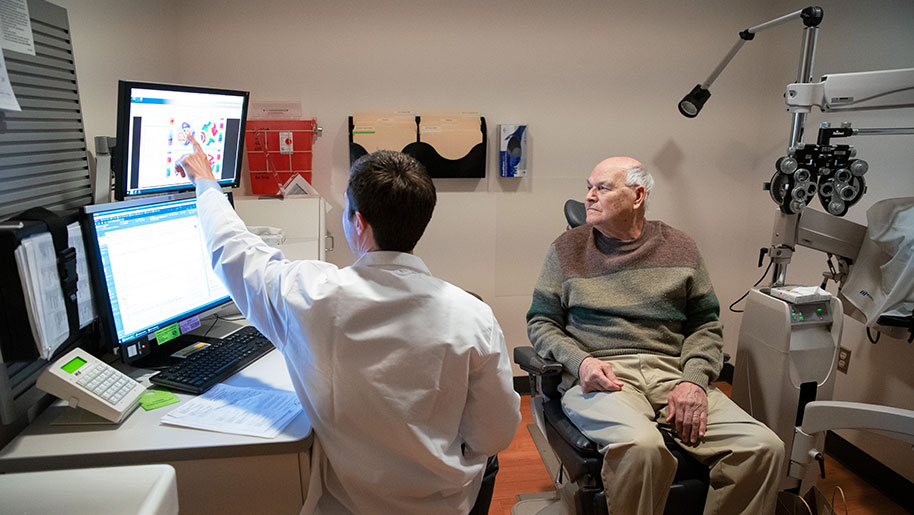 Corneal transplants are an effective treatment for complications of shingles, which can reduce vision to legal blindness if the painful rash spreads to the eye.

Shingles is caused by the same virus that causes chickenpox, and 10 to 20 percent of patients will develop herpes zoster ophthalmicus. The most common complication is corneal scarring.

But even in eyes with preoperative risks, corneal transplants can help older adults regain their vision, according to a large study conducted by the University of Michigan Kellogg Eye Center.

There was a reported 94 percent graft survival a year after surgery among patients with herpes zoster who underwent corneal transplant, and vision improved significantly.

The study in the British Journal of Ophthalmology is the largest of its kind and involved retrospective analysis of 53 eyes of 53 patients treated by Kellogg doctors. In most cases, patients had surgery six years after shingles.

Christopher Hood, M.D., a Kellogg cornea specialist and one of the study authors, stresses the importance of choosing surgical candidates conservatively, operating on quiet eyes that are absent of disease whenever possible and monitoring the patient closely after surgery.

“What we learned is corneal transplants can make a significant difference in visual acuity, but it’s important to control inflammation before transplant,” Hood says.

Hood performed a corneal transplant on Calvin Schlemmer, of Angola, Indiana, whose vision loss resulted from a bout with shingles diagnosed a decade ago.

The diagnosis was life-changing for Schlemmer, who was healthy, in his 60s and working as an accountant.

The first sign was a facial itch that progressed to a rash covering one side of his face, his forehead and around his eye. While the rash resolved in weeks, the nerve pain lingered, and he lost vision in one eye.

“I could see figures in front of me, but I couldn’t tell what they were,” says Schlemmer, 79.

Even with steroid eyedrops and antiviral treatment, many patients like him will develop vision-limiting corneal complications that are difficult to treat.

By 2018, his eyes were healthy enough, Hood believed, for a transplant. It worked well enough for Schlemmer to be in the driver’s seat during a cross-country road trip.

All surgeries in the study involved use of an oversized donor cornea. Interrupted nylon sutures were used alone or in combination with continuous nylon sutures. After surgery, all patients received subconjunctival injections of an antibiotic and a corticosteroid.

Postoperatively, corticosteroid drops were used every two to six hours and tapered at the surgeon’s discretion, typically over the first year. Some patients were prescribed oral acyclovir, an antiviral medicine.

Nearly half of patients had corneal anesthesia, a loss of corneal sensation, at the start of the study, while 30 percent had deep corneal neovascularization in four quadrants of the eye. Also, 47 percent of eyes had comorbid ocular disease, including cataract, glaucoma and macular disease.

Twenty patients, or 37.8 percent, were given acyclovir for the entire postoperative period.

Grafts remained clear at one year (94 percent), two to four years (82 percent) and five or more years (70 percent) of follow-up.

Although most grafts remained clear, long-term visual potential may be limited by comorbid ocular diseases, according to the study.

Visual acuity improved at one year postoperatively; however, the improvement was not sustained.

Corneal anesthesia  is common after herpes zoster and can lead to graft failure.

But new procedures like corneal neurotization can restore sensation and nerve function and improve transplant outcomes. Kellogg is one of the few places in the country where it’s offered.

Adults are taking precautions to prevent shingles of the eye and its complications by getting vaccinated.

Two shingles vaccines are available in the U.S. — Shingrix and Zostavax — and are in high demand among people over age 50.