Pairing a smartphone to capture retinal images with artificial intelligence to interpret them may help overcome barriers to ophthalmic screening for the disease. 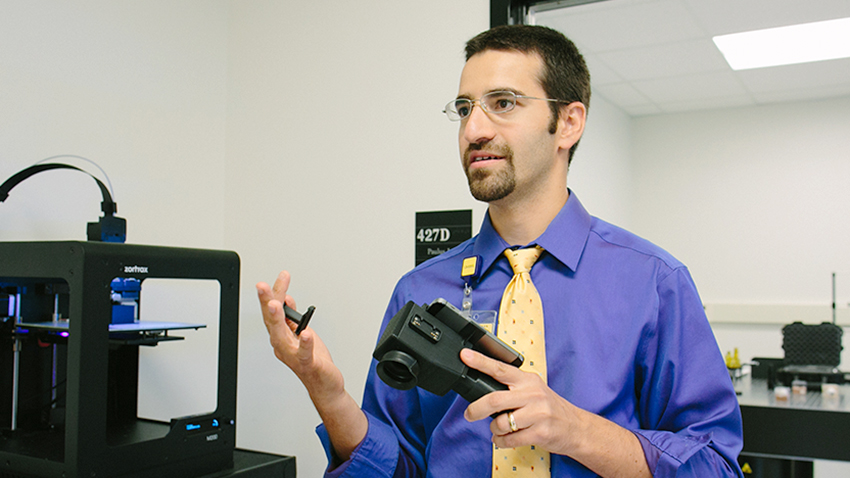 A novel pairing of two technologies may offer a solution for better screening for diabetic retinopathy, a condition that can lead to permanent vision loss if not caught early.

At the 2019 annual meeting of The Association for Research in Vision and Ophthalmology, researchers at the University of Michigan Kellogg Eye Center revealed that combining a smartphone-mounted device that takes high-quality retinal pictures with artificial intelligence software that reads them can determine in real  time whether a patient should be referred to an ophthalmologist for follow-up.

Michigan Medicine is one of a handful of institutions leading an effort to adapt smartphone technology to ophthalmic screening.

Paulus was part of a Kellogg team that developed a device that turns a smartphone into a functioning retinal camera.

In 2016, the project, CellScope Retina, was one of 12 funded by U-M’s Translational Research and Commercialization for Life Sciences Innovation Hub, which accelerates ideas with a high potential for positively impacting human health.

The new study utilizes the latest generation of the device, now called RetinaScope.

While smartphone platforms like RetinaScope can be used to deliver high-definition retinal images virtually anywhere, that’s only part of the challenge.

“It can take two to seven days for an ophthalmologist to interpret the images,” Paulus explains. “To make screening truly accessible, we need to provide on-the-spot feedback, taking the photo and interpreting it while the patient is there to schedule an eye appointment if necessary.”

“Deep neural network is an AI software platform that can enhance and review images and provide automated grading of lesions present in DR, indicating which lesions require referral to an ophthalmologist for follow-up,” he says.

Paulus’ team utilizes a proprietary software platform called EyeArt developed by the California-based company Eyenuk. “This is the first study to combine the imaging technology with automated real-time interpretation and compare it to gold standard dilated eye examination,” Paulus says, “and the results are very encouraging.”

Data was collected from 69 adult patients with diabetes seen in the Kellogg Eye Center Retina Clinic, including previously recorded results of dilated slit-lamp fundus examinations by their treating clinicians.

After pupillary dilation, RetinaScope was used to image patient retinas and the images were analyzed with EyeArt software, which graded them as referral-warranted diabetic retinopathy (RWDR) or non-referral-warranted DR.

“We took the extra step of comparing both automated interpretation and human expert graders with slit lamp evaluation to overcome what we felt was a shortcoming of similar studies conducted elsewhere,” says Michael Aaberg, a research assistant in the Paulus lab and study co-author.

“When human grading is used as the only check of AI-based grading, there’s a risk that photos that fail to accurately capture the pathology of DR could be interpreted incorrectly by both,” Aaberg says.

The study compared two measurements: if the screening was sensitive enough to find disease, and if it was specific enough to confirm when an individual does not have diabetic retinopathy.

“Sensitivity is the more crucial measurement in a screening test,” explains Aaberg, “since the worst-case scenario is disease that progresses due to a missed diagnosis.”

Slit-lamp evaluation confirmed RWDR in 53 subjects (76.8 percent). Automated interpretation had a sensitivity of 86.8 percent (above the 80 percent recommended for an ophthalmic screening device) and specificity of 73.3 percent.

One of the human graders achieved a level of sensitivity that was higher by a statistically significant factor (96.2 percent), and both had lower specificity (40 percent and 46.7 percent).

“This is the first time AI used on a smartphone-based platform has been shown to be effective when compared to the gold standard of clinical evaluation,” says Paulus.

Encouraged by both these findings and the soon-to-be-published results of a usability study in a primary care clinic, Paulus’ lab continues to pursue hardware and software improvements (notably a version that does not require pupillary dilation), as well as FDA clearance.

“We’re focused on overcoming patients’ reluctance to seek DR screening by bringing it to them,” Paulus says, “making it easy, immediate and available in a familiar clinical environment.”