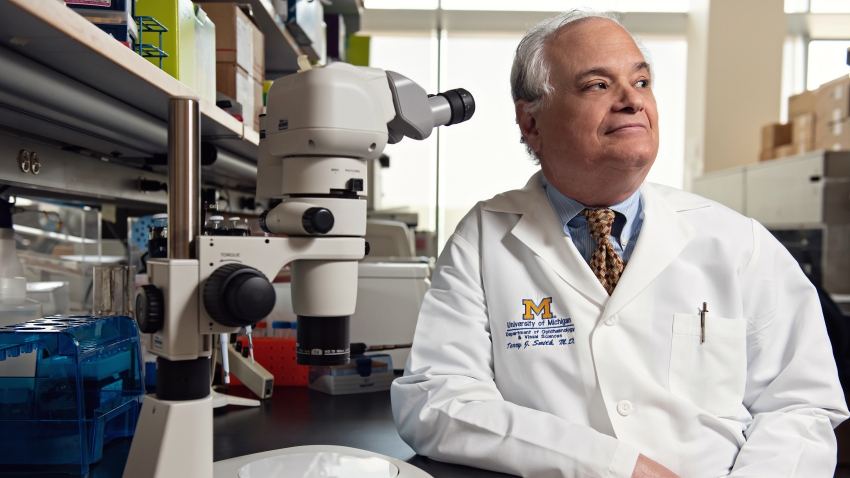 Watch for progression of symptoms such as proptosis, or bulging of the eye, eyelid swelling, pain and double vision. Wait until the disease becomes inactive before patients can have costly and complex surgery that may never fully restore vision or appearance.

At a Graves Disease and Thyroid Foundation patient event in Seattle, patients will hear an update about a highly anticipated drug that could change the treatment paradigm.

“We’re very excited that, for the first time, we may have a medical therapy that will not only improve the inflammation around the eyes, but may lessen the severity and change the outcome of the disease,” says the foundation’s scientific director Terry J. Smith, M.D., a Graves disease specialist and professor of ophthalmology at the University of Michigan Kellogg Eye Center who will give the research update at the event Sunday.

As the nation’s only endocrinologist with a full-time faculty appointment at an academic eye center, Smith says he considers himself an interloper.

But forging new paths is his hallmark.

He’s devoted to understanding the complex signaling of orbital cells that can cause a cascade of negative effects.

His basic science discoveries which began while on the faculty at the University of California at Los Angeles gave rise to clinical trials at Kellogg to test teprotumumab, a human monoclonal antibody. It was originally developed as a cancer drug.

Although teprotumumab failed to exhibit efficacy in patients with cancer, researchers thought it might be helpful in interrupting the Graves eye disease process.

Teprotumumab is a complex protein that works by inhibiting the insulin-like growth factor I receptor (IGF-1R) signaling pathway in the orbital cells of patients with Graves eye disease.

The 83 patients enrolled in the phase 3 OPTIC trial received eight intravenous infusions of teprotumumab or placebo every three weeks for up to 21 weeks.

With 83 percent of the teprotumumab-treated patients in this trial demonstrating at least a 2 millimeter reduction of proptosis in their more severely affected eye, it would appear that patients with Graves eye disease may soon have a new treatment option.

“In the study, patients treated with teprotumumab had an unprecedented reduction in proptosis, which is currently only treatable via surgery after the active disease has ended,” says Raymond Douglas, M.D., Ph.D., the study’s co-principal investigator and director of the orbital and thyroid eye disease programs at Cedars-Sinai Medical Center.

Horizon Therapeutics, which is the study’s sponsor, plans to submit a biologics license application to the Food and Drug Administration later this year. The FDA had given the agent breakthrough status, which could fast-track its review.

“If approved, teprotumumab would give physicians the first medicine shown to reduce eye bulging during active thyroid eye disease, in addition to treating other painful symptoms,” Douglas said in a Horizon news release.

Physicians have long searched for a more effective remedy for Graves disease, an autoimmune disorder that leads the thyroid gland to produce more hormones than it should.

About 50 percent of patients with Graves disease develop eye problems.

Traditional treatments include steroids to reduce inflammation and swelling behind the eye and artificial tears to relieve dryness.

Smith’s lab was the first to describe the unique molecular attributes of tissue surrounding the eye that make it susceptible to inflammation in Graves disease.

The study drug appears to reset the immune system, Smith says, by blocking an autoimmune attack on the muscles and fatty connective tissues around the eyes.

The dramatic results of the Phase 3 confirmatory trial, in addition to positive Phase 2 data, move Horizon a step closer to delivering the first FDA-approved treatment for people living with active Graves eye disease.

In both studies, patients responded quickly, experiencing results within weeks of starting injections, doctors say, and with few side effects.

Adverse events associated with teprotumumab were limited to worsening of hyperglycemia in those with preexisting diabetes. The events were easily remedied with medication adjustments.

The reduction in proptosis has been durable, lasting for at least one year in many clinical trial patients, Smith says.

“We have an agent that has performed better than treatments currently available to us, and may give us the option of treatment earlier in the disease,” Smith says.